Top Headlines
Home » State News » Odisha has been placed among the top six states in India as far as best performing states in the COVID positivity rate is concerned. 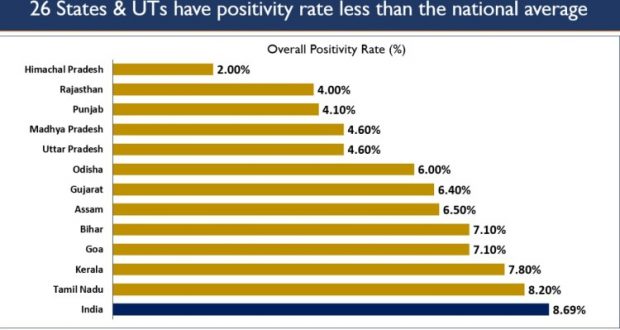 Odisha has been placed among the top six states in India as far as best performing states in the COVID positivity rate is concerned.

Bhubaneswar20/8/20:: Odisha has been placed among the top six states in India as far as best performing states in the COVID positivity rate is concerned. The Union Health Ministry informed this in its press release today.

It means as more and more testing is being conducted by Odisha with tests crossing 50,000-mark per day, the lesser number of people being tested COVID positive is the hallmark of a good performing state.

The sustained and robust COVID management efforts by Odisha Government is resulting in such good performance by the State in its fight against COVID-19.

2020-08-20
Editor in chief
Previous: Orissa High Court has directed the authorities to take a decision on holding Ganesh Puja in the twin cities
Next: Odisha Chief Minister has thanked the MLAs and PRI representatives of Kendrapara district for their best efforts to contain COVID-19