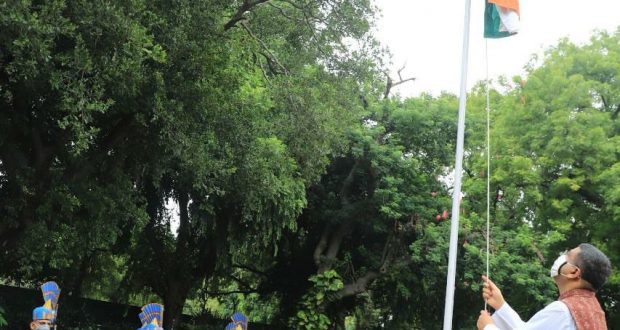 DHARMENDRA PRADHAN GREETS THE NATION ON THE 74TH INDEPENDENCE DAY

in National August 15, 2020 Comments Off on DHARMENDRA PRADHAN GREETS THE NATION ON THE 74TH INDEPENDENCE DAY 438 Views

New Delhi:15/8/20:Shri Dharmendra Pradhan, Union Minister of Steel and Petroleum & Natural Gas has greeted the nation on the 74th Independence day today. In a tweet message ‘From Bharat to Aatmanirbhar Bharat: The Wheel of transition’ Shri Pradhan said, “Our priorities on the domestic and international front have undergone major changes under the Modi government.  In recent times, there has been much debate about whether a self-reliant India or Atma Nirbhar Bharat is compatible with globalization or internationalism. While internationalism has many positives, it also has its limits as evident during the ongoing Covid-19 pandemic crisis. Each country withdrew, and understandably so, for containing the crisis on the domestic front first. Hence, making ourselves self-sufficient is no way an indication that we shirk our international commitments, partnerships, and responsibilities but only an unequivocal intent to guard our national security interests.

He further said, “India has been a responsible global player. Our civilization ethos believes in “Vasudeiva Kutumbakam” or in the principle of a global family. We treat Nature as our mother and each of its progeny as our extended family. Many of the reforms that were recently announced are aimed at building an ecosystem for wider participation of players for wealth creation and entrepreneurship and mobilising global technology to unleash the power of competitive markets. But this growth trajectory will follow a unique Indian model where domestic interest is prioritised over all else. Under the leadership of PM Modi, India will continue gaining in stature among the global comity of nations.”

2020-08-15
Editor in chief
Previous: IIT Bhubaneswar Celebrates Independence Day Amidst the Pandemic with Patriotic Fervour
Next: MS Dhoni has announced his retirement from international cricket.