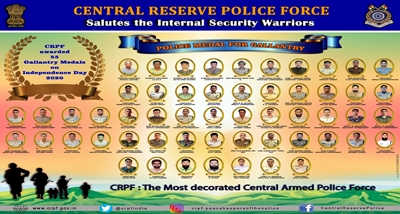 Among the personnel receiving Gallantry Awards, 55 are from CRPF, 81 are from J & K police, 23 are from Uttar Pradesh, 16 from Delhi Police, 14 from Maharashtra and 12 are from Jharkhand and the remaining from the other States and UTs and Central Armed Police Forces.