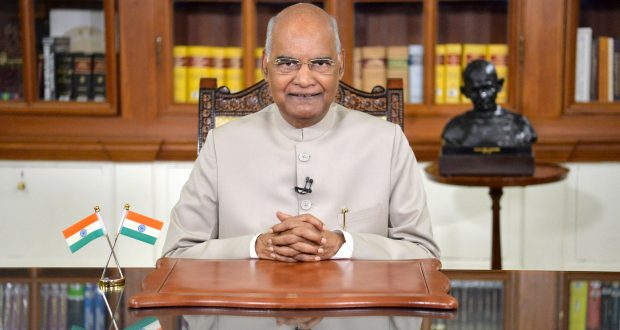 India continues to engage with world economy while maintaining its identity through Atma-Nirbharta: President

in National August 14, 2020 Comments Off on India continues to engage with world economy while maintaining its identity through Atma-Nirbharta: President 377 Views

New Delhi:14/8/20:President Ram Nath Kovind highlighted some of the flagship schemes of the government including Pradhan Mantri Gareeb Kalyan Yojana, One Nation, One Ration Card, Vande Bharat Mission and Shramik Special Trains among others, which he said, have eased people’s lives amid these testing times.

Reaffirming, India’s belief in the principle of Vasudhaiv Kutumbakam, World is One family, President said that the country, apart from taking care of its own citizens, also extended helping hand to many foreign countries. He said, the overwhelming support India got at the elections for the non-permanent seat of the United Nations Security Council bears testimony to the goodwill the country enjoys internationally.

Speaking about the impetus to self-reliance, Mr. Kovind said that India’s push to Atma-Nirbharta comes without alienation or distancing from the world. He said, the country will continue to engage with the world economy while maintaining its own identity.

Hinting at the recent border skirmishes, Mr. Kovind said that Indian soldiers gallantly defended the borders of the country from all misadventures of expansion. He remembered the martyrs who sacrificed their lives protecting the nation’s pride and said that the entire nation salutes them for their brevity. He also mentioned that the country has taken the current crisis as an opportunity and numerous landmark reforms benefitting all spheres of life have been introduced by the government.

Mr. Kovind exhorted on the lessons which the pandemic has unveiled to the humanity. He also stressed on the importance and adoption of human-centric collaborations over economy-centric inclusions. He said, these testing times have brought all sections of people together apart from highlighting the need to develop a robust health infrastructure in the country.

The President also called for accelerating developments in science and technology which he said helped meet the twin objectives of saving lives and resumption of activities in midst of a global pandemic.

Speaking about the New Education Policy, Mr. Kovind said that its implementation will lead to a new quality education system which will help transform the future challenges into opportunities, paving the way for a New India. He also lauded the unflinching belief of countrymen in the judicial system, which he said was depicted in the restraint and patience shown by the people during the long drawn Ayodhya Ram janmbhoomi case. He said, Indian ethos of peace, non-violence, love and harmony emerged victorious globally when all the concerned parties and people respectfully accepted the verdict of the Supreme Court in the matter.

Mr. Kovind wished for universal good health and urged everyone to continue to maintain caution and act responsibly in order to defeat the menace of Corona Virus.

2020-08-14
Editor in chief
Previous: HONOURS AND AWARDS : INDEPENDENCE DAY 2020
Next: ADDRESS TO THE NATION BY THE PRESIDENT OF INDIA, SHRI RAM NATH KOVIND, ON THE EVE OF INDIA’S 74TH INDEPENDENCE DAY