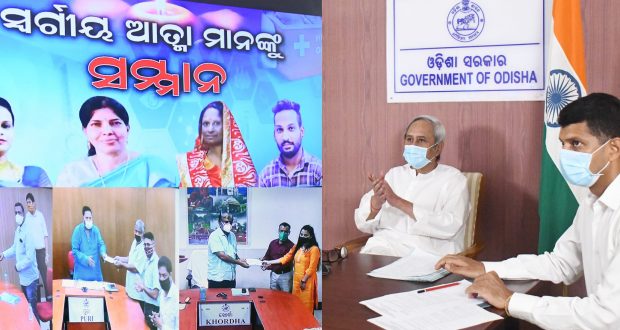 Bhubaneswar:13/8/20: Odisha Chief Minister Naveen Patnaik on Thursday felicitated three families with Suraj Award posthumously to mark the World Organ Donation Day. The awards were presented to the families of Rani Patra from Ganjam’s Digapahandi, Suchitra Das from Bhubaneswar, and Rajlaxmi Das of Delang in Puri district. The Chief Minister said Suraj is an inspiration for all of us and shines bright as the sun, even after his death. He and the awardees today are living examples of humanity and service to society. Worthwhile to mention here that a young man called Suraj went into brain dead situation after a severe road accident in Surat in Gujarat in 2019. His parent took a decision to donate his kidney, liver, heart and two eyes to six persons.

Chief Minister Naveen Patnaik had instituted an award in the name of Suraj to honour such persons who donate their organs to save the lives of others. Patnaik had awarded Rs 5 lakh to the families for being honoured by Suraj Award. Odisha Speaker Surjya Narayan Patro, Minister Ashok Chandra Panda and MLA Pradeep Maharathi attended the event from Digapahandi, Bhubaneswar and Pipili respectively. Health Minister Naba Das, Chief Secretary, Development Commissioner, and other senior officials. The family members of the awardees were also present in the award ceremony, which took place through video conferencing.