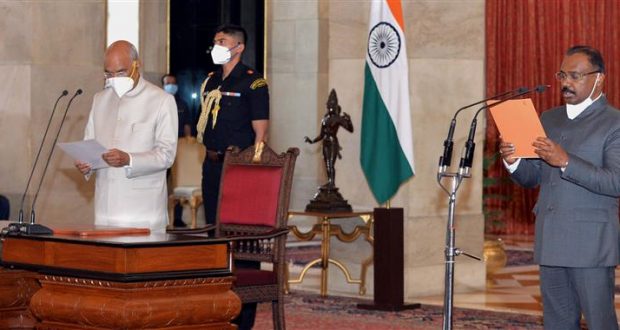 After the oath ceremony, Shri Murmu came to the CAG office, where he was welcomed by the senior officers of the Indian Audit and Accounts Department. He then offered floral tributes at the statues of Mahatma Gandhi and B R Ambedkar at the CAG office.

Murmu was appointed on October 31 last year after the erstwhile state was bifurcated into the Union Territories of Jammu and Kashmir and Ladakh, following the abrogation of its special status. Incidentally, Murmu resigned on the first anniversary of the revocation of special status under Article 370 of the Indian Constitution. Before moving to J&K, Shri Murmu served as Joint Secretary in the Department of Expenditure, Additional Secretary in the Department of Financial Services and Department of Revenue and then Special Secretary before serving as full-fledged Secretary of the Department of Expenditure. Before his tenure in Delhi, Shri Murmu has served on important assignments in the State Government of Gujrat. He has wide experience in administrative, economic and infrastructure fields.