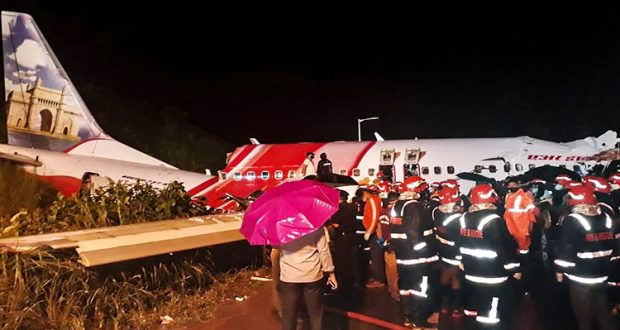 Kozhikode: Rescue operation underway after an Air India Express flight with passengers on board en route from Dubai skidded off the runway while landing, at Karippur in Kozhikode, Friday, Aug. 7, 2020. (PTI Photo)(PTI08-08-2020_000004B)

Kozhikode:8/8/20: At least 18 people, including two pilots, died when an Air India Express aircraft from Dubai crashed after overshooting the runway in Kozhikode last night. 162 people have been injured. 15 of them are in serious condition. Rescue operations at the site have been completed and all injured persons have been admitted to hospitals in Malappuram and Kozhikode. There were 191 people including 10 infants, 2 pilots, and 5 cabin crew onboard the aircraft.

DGCA said the Dubai-Kozhikode Air India Express flight fell 35 feet from the hilltop runway after landing at Karipur Airport and broke down in two pieces. While the two pilots are among the dead, four-cabin crew members on board the aircraft are safe. It is believed that heavy rains in Kerala could be one of the reasons behind the mishap. Civil Aviation Minister Hardeep Singh Puri said, two investigation teams of professionals from Air India, Airports Authority of India, and Aircraft Accident Investigation Bureau have been rushed to Kozhikode.

President Ram Nath Kovind spoke to Kerala Governor Arif Mohammed Khan and inquired about the situation. Expressed deep distress, he said his thoughts & prayers are with affected passengers, crew members & their families. Vice President Venkaiah Naidu has expressed deep anguish at the loss of lives in the tragic air mishap at Kozhikode airport. In a tweet, Mr. Naidu extended condolences to the families who lost their dear ones in the crash and hoped for the speedy recovery of the injured.

Prime Minister Narendra Modi spoke to Kerala Chief Minister Pinarayi Vijayan and inquired about the situation. Expressing pain over the accident, Mr Modi said, his thoughts are with those who lost their loved ones. Prime Minister also wished a speedy recovery to those injured. Home Minister Amit Shah said he is distressed to learn about the tragic accident. In a tweet, he said, NDRF was instructed to reach the site and assist in rescue operations.

2020-08-08
Editor in chief
Previous: Record number of 1810 COVID-19 patients recovered from the disease in Odisha
Next: G C Murmu takes oath as Comptroller and Auditor General of India