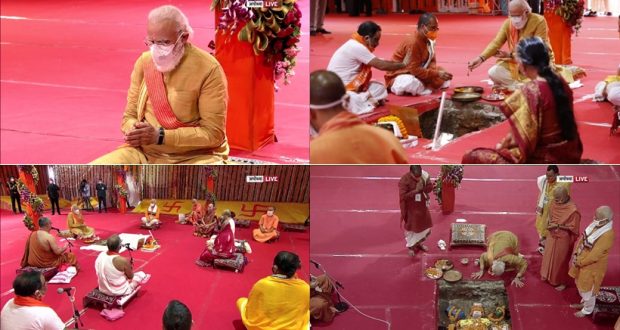 The Bhoomi Poojan ceremony started at sharp 12.30 afternoon and culminated at 12.45 p.m. With this, many saints, spiritual leaders and other leaders associated with Ram Temple movement were present at the ceremony. Mahesh Bhagchandka and Pawan Singhal from the family of late Ashok  Singhal, Former President of Vishwa Hindu Parishad were Mukhya Yajman in Bhumi Pujan function.

Prime Minister Narendra Modi became the first Prime Minister to have Darshan at Ram janmbhumi and Hanumangarh temple of Ayodhya and after planting a sapling of Parijat Tree he took part in the Bhumi Poojan ceremony.

Mr Modi released postage stamps on the model of Ram Temple on this occasion. A wooden Kodand Ram Statue was presented as a souvenir to Prime Minister from CM Yogi Adityanath.

On the occasion, Chief Minister of Uttar Pradesh Yogi Adityanath said that it was a dream which is being turned into reality after a long gap of almost five centuries.

AIR correspondent reports, Ram Kaj Keenhe Bina Mohu Kahan Vishram….means how can I be relaxed without completing  the work of Lord Rama…the lines of Ramcharitmanas reflected the emotions of the Prime Minister on the occasion.

It was sharp 12.45 afternoon when the long-awaited dream of crores of Rambhakts across the world turned into reality and a chapter in the history was added in Ayodhya. Prime Minister Narendra modi performed the Bumipoojan for the temple of Ramlala amidst chanting of Shlokas, Blowing of conch shells and renditions of jai Shri Ram.

Clad in traditional indian attire, Dhoti Kurta, Prime Minister  bowed down in front of Ramlala, performed pooja, accepted the Mukut or the crown and turban given by priests of hanumanGarhi and did Parikrama also. He became the first Prime Minister to do so. The city of Lord Ram was reverberating with the sound of Ramdhun on this occasion. Although lanes of Ayodhya took a deserted look because of the security reasons but in the houses and temples of the city people were doing  Ramkeetran and recitation of Rancharitmanas.