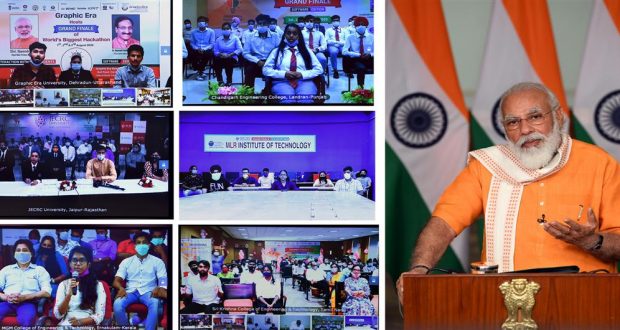 Speaking at the Grand Finale of Smart India Hackathon, PM said that students are working on several solutions to the challenges being faced by the country. Along with providing solutions to the problems, it also strengthens India’s aspirations regarding Data, Digitization and Hi-tech Future. Acknowledging that in the fast paced 21st century, India needs to swiftly change itself to continue playing an effective role,  the Prime Minister said that the necessary ecosystem is being built in the country for Innovation, Research, Design, Development and Entrepreneurship. He asserted that aim is to make India’s education more modern, and to create opportunities for  talent.

Speaking on the National Education Policy, the Prime Minister said it was drafted keeping in mind the thoughts, needs, hopes and aspirations of 21st century youth. This is not just a policy document but also a reflection of aspirations of more than 130 crore Indians, he added. He said “Even today many children feel that they are judged on the basis of a subject in which they have no interest. Due to the pressure from parents, relatives, friends etc children are forced to pursue the subjects chosen by others. This has resulted in a large population, which is well-educated, but most of what they have read, is not useful for them.”  He highlighted that New Education Policy seeks to change this approach by bringing a systematic reform in India’s education system and attempts to transform both Intent and Content of education. He said that NEP focuses on Learning, Research and Innovation to make the school, college and university experience: Fruitful, Broad-based and one that guides to one’s natural passions.

Addressing the students, the Prime Minister said “This Hackathon is not the first problem you have tried to solve, nor is this the last.” He wished the youngsters to continue doing three things: Learning, Questioning and Solving. He said when one learns, one gets the wisdom to question and India’s National Education Policy reflects this spirit. He added the focus is shifting from the burden of the school bag, which does not last beyond school, to the boon of learning which helps for life, from simply memorising to critical thinking.

The Prime Minister said that emphasis on interdisciplinary study is one of the most exciting features of the New Education Policy. This concept has been gaining popularity, as one size does not fit all. He said that emphasis on interdisciplinary study will ensure the focus is on what the student wants to learn rather than what the student is expected to do by the society.

Quoting Baba Saheb Ambedkar that education should be accessible to all, PM said that this education policy is also dedicated to his idea of accessible education. National Education Policy is big on access to education, starting from primary education. He said the policy aims to increase Gross Enrolment Ratio in Higher Education to 50 percent by 2035.  He added this education policy emphasizes on creating job creators rather than job seekers. That is, in a way an attempt to bring reform in our mindset and in our approach.

PM said while the Policy focuses on Local, equal emphasis has been laid on global integration. Top Global Institutions have been encouraged to open campuses in India. This will benefit Indian youth in getting world-class exposure and opportunities, and help them prepare for global competition as well.  This will also help in building world-class institutions in India, making India a hub of global education.

2020-08-02
Editor in chief
Previous: Indus Valley International Film Festival (IVIFF) will be held from 1st to 9th August
Next: Sisters from Northeast tying Rakhi on Jawans deployed in Jammu & Kashmir and Ladakh