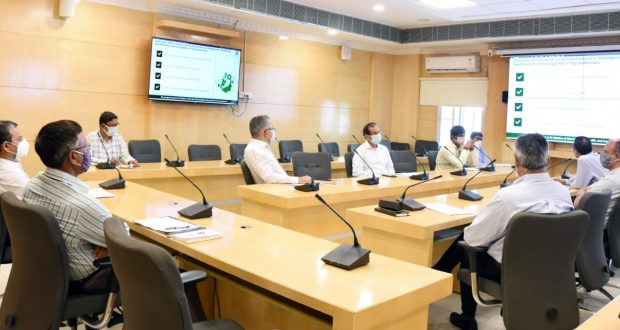 Bhubaneswar:30/7/20: In another step towards realization of 5T objectives,  Dakshyata, the performance management system in the agricultural sector has been extended to Panchayat Level from Kharif season of the current year. This was discussed in a high-level monitoring committee held under the Chairmanship of Chief Secretary Sri Asit Tripathy in Lokseba Bhawan conference hall recently.

Reviewing various contours and parameters of the system, Sri Tripathy advised other departments to emulate basic architect of the system through customization as per their schemes and programmes. The departments were advised to adopt the objective parameters that actually effect transformations at the ground level. Sri Tripathy said, “The objective criteria of assessment will identify the real performers by eliminating the subjective prejudice and human errors”. Development Commissioner Sri Suresh Chandra Mohapatra advised to make the assessment real time through GIS links.

It was decided to recognize the top performers through various non-monetary incentives in their service carrier.  Principal Secretary Agriculture & Farmers Empowerment Sri Saurabh Garg said, “Dakshyata system has been designed through a consultative approach spreading over nine months with various stakeholders. More than 400 suggestions received from ground level officers have also been considered and addressed while developing the system.   All Group-B and Group-C officers viz. Assistant Agriculture Officer, Assistant Agriculture Engineer, Agriculture Overseer, Village Agriculture Worker, Asst Horticulture Officer, Horticulture Overseer, Horticulture Extension Worker, Asst Soil Conservation Officer, Soil Conservation Overseer, Soil Conservation Extension Worker engaged in field level operations will be considered under this initiative”. The performance would be assessed in every month, and, each one can see his/her own position in the Dakshyata portal.

2020-07-30
Editor in chief
Previous: CC I approved the proposed acquisition of 49% of the total equity share capital of OPGC by Adani Power Limited
Next: COVID-19 tally in Bhubaneswar surpassed 2600-mark with 105 new positive cases