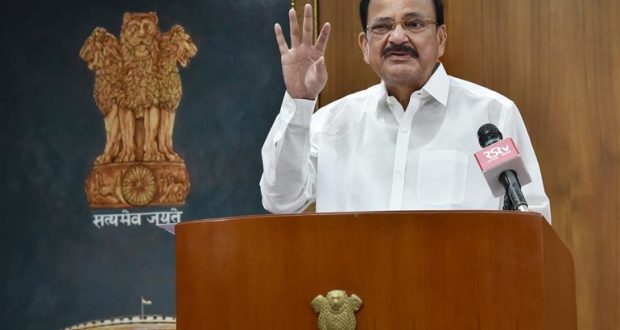 in Literature July 29, 2020 Comments Off on Vice President of India called for protecting and promoting various Indian languages through the use of mother tongue 576 Views

Newdelhi:29/7/20: The Vice President of India, Shri M Venkaiah  Naidu today called for protecting and promoting various Indian languages through the use of mother tongue in different fields from education to administration.

Inaugurating an online webinar on “ Knowledge Creation: Mother Tongue” organized by the Department of Telugu, University of Hyderabad, and the Telugu Academy, Shri Naidu stressed the need for giving special thrust to the respective official language by every State Government.

Observing that language was the lifeline of civilization, he said it denotes the identity, culture, and traditions of the people. It plays an important role in preserving music, dance, customs, festivals, traditional knowledge, and heritage.

Calling for imparting education in the mother tongue up to primary school, he stressed that a language would gain popularity only through widespread usage. He said it was a fallacy to think that progress could be achieved only if education was pursued in English. Research has shown that those who are proficient in their mother tongue can learn other languages with equal ease.

For instance, he said that about 90 percent of the Nobel Laureates (barring Nobel Peace prize recipients) up to 2017 were those who completed their education in their respective mother tongues.

Similarly, another survey of countries impacted greatly by globalization showed that nations which accorded importance to mother tongue were among the top 50.

Shri Naidu said that it was also not correct to think that modern research could be conducted only if one was proficient in English. It should be noted that about 90 percent of the top 40-50 countries in the Global Innovation Index are those in which education was imparted in their respective mother tongues.

Pointing out that many visiting foreign VIPs, despite knowing English, speak in their mother tongue during their discussions with top Indian dignitaries, the Vice President said that by doing so they were conveying a message of self-respect.

Expressing the need to develop the mother tongues to meet modern needs, the Vice President said that complex scientific and technical terms should be simplified in Indian languages.

Stressing the need to strengthen research on various Indian languages, the Vice President advised researchers to find the endangered words and promote their use in day-to-day conversations, essays, and textbooks to revive decaying languages.

Asking the teachers and parents to encourage their children to speak in mother tongue at home and elsewhere, he said it should become the lingua franca for all educational, socio-economic and other activities.

Shri Naidu also wanted the media to promote the widespread use of native languages.