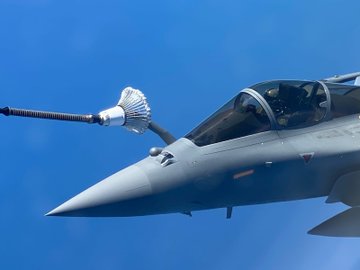 in National July 28, 2020 Comments Off on India is all ready to welcome the first batch of five Rafale jets 918 Views

Newdelhi:28/7/20: India is all ready to welcome the first batch of five Rafale jets tomorrow morning. The fighter jets, built by French aviation firm Dassault, took off from the Merignac airbase in southern France’s Bordeaux. The fighter jets will officially be inducted and join the Indian Air Force fleet at Haryana’s Ambala Airbase.

The five aircraft batch is the first tranche of the 36 planes bought by India from France in a 59,000-crore rupees inter-governmental deal in 2016. The Rafale aircraft is covering a distance of nearly 7,000 km from France to India with mid-air refueling and a single stop at a French airbase in the United Arab Emirates (UAE).

Indian Embassy in France in a statement said, Delivery of ten aircraft has been completed on schedule but Five will stay back in France for training Mission. The delivery of all thirty-six aircraft will be completed on schedule by the end of 2021.  AIR correspondent reports that the Rafale fighter jets had mid-air refueling before reaching the Al-Dhafra airbase in UAE. After the layover, the jets will embark on their final leg of journey to India.

The Indian Air Force appreciated the support provided by the French Air Force for the Rafale journey back home. The fighter jets are capable of carrying a range of highly effective weapons, including the Keter air to air missile and the scalp cruise missile. The Rafale jets will come with various India specific modifications, including Israeli helmet-mounted displays, radar warning receivers, low band jammers, and 10-hour flight data recording. The Air Force has readied the required infrastructure to welcome the jets in its line up.

2020-07-28
Editor in chief
Previous: Tiger population in Odisha has remained unchanged between 2014 and 2018 as the figure stood at 28
Next: Veteran actor Kumkum, who featured in over 100 Hindi films passed away