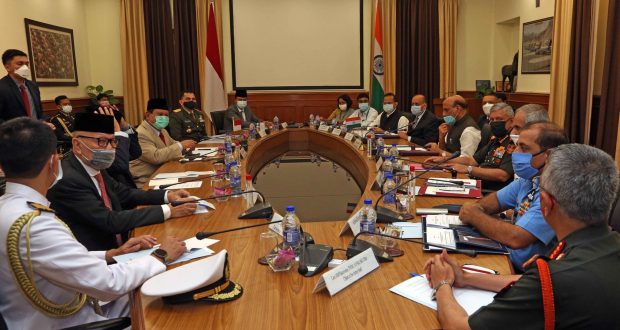 During the talks, Raksha Mantri reiterated the long history of mutually beneficial interactions between the two countries with a tradition of close political dialogue, economic and trade linkages as well as cultural and people to people interactions.

Conveying satisfaction on the military to military interactions, Shri Rajnath Singh indicated that the defence cooperation between India and Indonesia has witnessed an upswing in the recent years, which is in consonance with the Comprehensive Strategic Partnership between the two sides. Both the Ministers agreed to further enhance the bilateral defence cooperation in mutually agreed areas.

Potential areas of cooperation in the field of defence industries and defence technology were also identified by the two countries. Both the Ministers committed themselves to further strengthen bilateral cooperation in these areas and take them to the next level of deliverables.

The meeting ended on a positive note with a commitment to further strengthen and widen the scope of the bilateral cooperation between the two countries.

General Subianto was given ceremonial Guard of Honour on the lawns of South Block when he arrived for the Dialogue. He was personally received by Raksha Mantri Shri Rajnath Singh at the venue. Earlier, General Subianto visited the National War Memorial and laid a wreath as a mark of respect to the fallen heroes.

2020-07-27
Editor in chief
Previous: Results of Annual Matriculation Examination-2020 will be announced on July 29
Next: Union Minister for Chemicals and Fertilizers launches Schemes and announces guidelines paving way for setting up of Bulk Drugs Parks