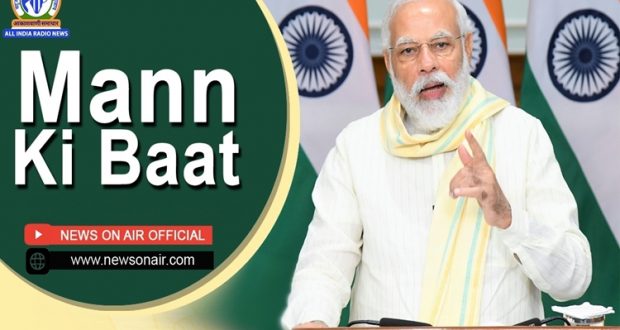 in National July 26, 2020 Comments Off on Prime Minister Narendra Modi has greeted the nation on the occasion of Kargil Vijay Diwas 381 Views

Newdelhi:26/7/20: Prime Minister Narendra Modi has greeted the nation on the occasion of Kargil Vijay Diwas calling it a victory of high morale and bravery of armed forces. Addressing the nation in Mann Ki Baat programme on All India Radio today, Mr Modi saluted the brave soldiers as well as their mothers. He said it was on this very day 21 years ago that the Army unfurled the flag of victory in the battle of Kargil.

Mr Modi stated that India can never forget the circumstances under which the battle of Kargil took place. He said Pakistan had embarked upon this misadventure, nursing delusions of encroaching upon the Indian soil, to distract attention from the internal strife prevailing there. It happened when India was making efforts to foster cordial relations with Pakistan but the country responded by backstabbing. He lauded the Indian Army, its valour and said the whole world witnessed the country’s might.

Mr Modi said people are reminiscing the Kargil Victory, throughout the country today. They are saluting the brave heart heroes and paying tributes to the martyrs of the battle in Kargil. He urged the youth to share the stories of the heroic deeds of the nation’s valiant warriors and their sacrifices throughout the day. He also called upon people to visit the website www.gallantryawards.gov.in. The website has an array of information on courageous warriors and tales of their valour.

Mr Modi recalled the address to the nation by former Prime Minister Atal Bihari Vajpayee made from Red Fort during the Kargil war. Vajpayeeji had then reminded the nation of a mantra of Mahatma Gandhi that in the face of any dilemma, one must think of the poorest and the most helpless person of the country. Mr Modi said these words are relevant even today. Going beyond Gandhi Ji’s thought, Atal ji had said that the Kargil war has given another Mantra that before taking any important decision, one must think whether the endeavor is befitting to the honour of the soldiers who laid down their lives in the remote mountains.

The Prime Minister said that in times of war, whatever people say or do has immense bearing on the morale of the soldiers. He stressed that the conduct, demeanour, speech, and statements of everyone must distinctly be conducive to enhancing the morale and honour of the soldiers. He said countrymen bound by a thread of unity, with the Mantra that the Nation is above everything else, bolster the strength of soldiers. He said that these days, battles are fought not just on borders but within the country too on many fronts simultaneously. He said every countryman has to decide his or her role in that.

Mr Modi said India has fought against COVID 19 unitedly and the recovery rate is better as compared to other countries. He said the mortality rate is much less as well compared to most countries. He said the loss of even one life is saddening, but India has succeeded in saving the lives of millions of people. The Prime Minister cautioned the people to remain extra vigilant as the hazards of Corona are far from over. He advised everyone to wear face masks whenever they are out in public in order to protect themselves and others from the disease.

The Prime Minister praised the rural regions for coming up as a beacon of guidance for the entire country during these tough times. He gave the example of Balbir Kaur from Jammu who is a Sarpanch of a Gram Panchayat named Gram Treva. Balbir Kaur got a 30 bed Quarantine Centre constructed in her Panchayat. He cited the example of sarpanch Zaitoona Begum of Chauntliwaar, Gaanderbal in Kashmir who distributed free masks and free ration in the vicinity. She also distributed crop seeds and apple saplings so that people did not face any inconvenience. He lauded Mohd Iqbal who is the Municipal President of Anantnag for designing and making a sprayer for sanitization of his area.

Mr Modi highlighted how the youth and women have come up with new experiments on the basis of their talent and skills in the present times of COVID 19. He said many self help groups in Bihar have begun making masks with Madhubani motifs which are very popular.

These Madhubani masks propagate regional tradition, protect health and also create opportunities for livelihood. He praised artisans of Tripura, Manipur and Assam for crafting high quality eco friendly water bottles and Tiffin-boxes from Bamboo. He also mentioned how more than thirty groups in Bishunpur, Jharkhand are collectively cultivating lemongrass. Mr Modi said many innovations are taking place for enhancing fruit quality, productivity and yield. He named the chooli or apricot fruit in Ladakh and Dragon Fruit in Kutch which have the power to transform the economy of the region. He said innovations are being adopted by local growers to avoid spoilage.

Stressing on the need for innovation, Prime Minister Modi talked about how the youth in Bihar have started to cultivate pearls after gathering information and taking training in Jaipur and Bhubaneswar. They are not only earning and becoming self reliant but also training the migrant labourers returning from other states at Muzaffarpur, Begusarai and Patna.

He expressed happiness that many people are gearing up to celebrate Rakshabandhan this time by linking the festival with Vocal for Local. He also greeted the nation ahead of Rakshabandhan celebrations

The Prime Minister emphasized that the correct and positive approach always goes a long way in transforming distressing times into opportunities, adversities into triggers of development and progress. He said the nation will celebrate National Handloom Day on 7th of August. Mr Modi said the Handloom and Handicrafts of India encompass a glorious history of hundreds of years. He urged everyone to use Indian Handloom and Handicrafts as much as possible, and also communicate to more and more people about them. He said local artisans and weavers will benefit from conversations about the richness and diversity of Indian handloom and handicrafts.

Mr Modi also expressed delight at how people from small towns and rural areas are shining in sports and education. He said youth from villages, small towns and ordinary families are coming forward to scale new heights of success. He interacted with Kritika from Panipat in Haryana, Vinayak from Ernakulam in Kerala, Usman Saifi of Amroha in Uttar Pradesh, and Kaniga from Tamil Nadu. The Prime Minister spoke to the talented youth about their hopes and aspirations.

The Prime Minister said a large part of country is grappling with floods. Many areas of states like Bihar and Assam are dealing with a series of difficulties due to floods. He said the whole nation stands by those affected by this disaster and all Governments, NDRF teams, Disaster response teams, Self help groups are working in tandem to provide relief and rescue in all possible ways.

He urged people to pay special attention to cleanliness and take immunity enhancers such as Ayurvedic kadha during the monsoon season. He said it is imperative that people protect themselves against other diseases during the COVID pandemic.

The Prime Minister congratulated Chandrika Prasad Santokhi for becoming the new President of Suriname and wished him the best on behalf of 130 crore Indians.  Mr Santokhi had participated in the Person of Indian Origin Parliamentary Conference organised in 2018. Mr Modi said it is a matter of pride that Mr Santokhi started his oath with Veda hymns and spoke in Sanskrit.