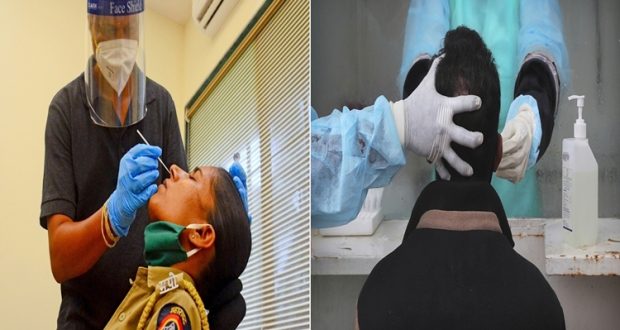 in National July 25, 2020 Comments Off on India achieves remarkable feat of conducting more than 4 lakh COVID-19 tests in a single day 288 Views

Newdelhi:25/7/20:The Union Government today said that for the first time, a record number of more than 4,20,000 COVID tests have been conducted in a single day. Union Health Ministry said, the tests per million has further increased to 11,485 and cumulative testing reached nearly one crore 60 lakh.

The Ministry said, a strong factor contributing to this achievement is the persistent increase in the number of labs from merely one in January 2020 to 1,301 today. This includes 902 government labs and 399 in the private sector. Revised facilitative guidelines of testing by ICMR and all-round efforts by the governments have also aided in widespread testing.

The Centre has advised all States and Union Territories to keep up the strategy of Test, Track and Treat with aggressive testing. The Ministry said, it may lead to a higher number of daily positive cases initially but would eventually achieve a decline as has been demonstrated after Union Government’s targeted efforts in the National Capital region of Delhi.

The Case Fatality Rate continues on its downward trend and it has significantly dipped to 2.35 per cent today. The Ministry said, India has one of the lowest fatality rates in the world.

During the last 24 hours, more than 32,000 COVID patients have recovered and the cumulative number of recovered cases has reached to over 8,49,000 today. The recovery rate has achieved another high of 63.54 per cent. The Health Ministry said, the gap between recovered patients and active COVID-19 cases has further increased to over 3,93,000.

2020-07-25
Editor in chief
Previous: Centre allocates additional Rs 40,000 crore in MGNREG Scheme in view of COVID-19 pandemic
Next: Fifth phase of the Vande Bharat Mission will begin from August 1