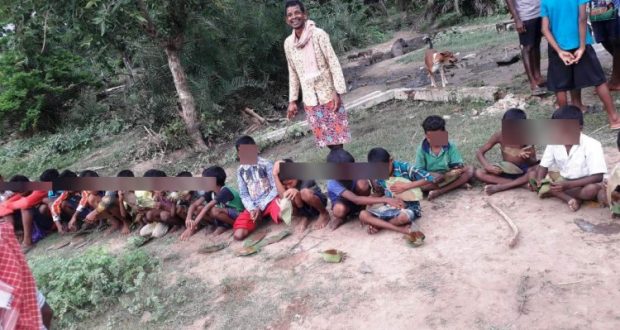 Liquor served to children at marriage party in Malkangiri

Malkangiri:21/7/20: The Malkangiri district administration has started an investigation into the incident in which some children of Parasanapalli village under Materu GP were served liquor at a marriage function.

District Child Protection Officer Narayan Das and District Excise Superintendent Ashok Kumar Seth have taken up the issue to ascertain if the photographs and the video that went viral were true and the children were served country liquor in the marriage party.

Reports said the incident occurred a few days ago as some senior persons served wine to the children. This incident has sparked sharp reactions from different quarters after pictures of the incident were found circulating on social media. They said this is unfortunate that such an incident has happened at a time when there is panic all around due to coronavirus and social distancing norms were flouted.

Most of them said to serve liquor to children in the name of tradition could not be taken for granted in the present-day society. The excise department has viewed the matter seriously and an investigation is on, official sources said.

Das said the incident took place nearly two weeks ago at a marriage function being solemnized at the house of Sana Muchaki. He said the children were served Pendum, a beverage made from rice. However, they have been sensitised not to abstain from such tradition and take good care of children during this critical juncture.

2020-07-21
Editor in chief
Previous: Amarnath Yatra will not be held this year
Next: Odisha Government will provide free rice and dal through PDS from July to November free of cost.