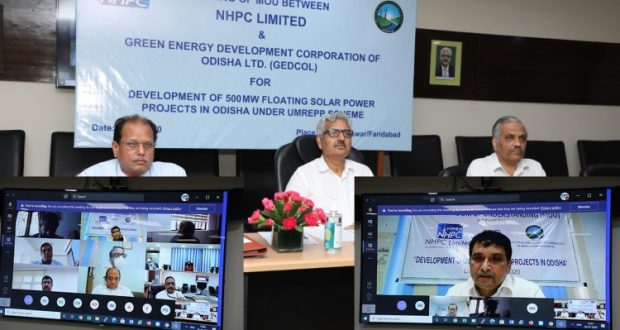 Bhubaneswar:20/7/20: A Memorandum of Understanding was signed between Green Energy Development Corporation of Odisha Ltd (GEDCOL) and National Hydel Power Corporation (NHPC) for the production of solar energy.

The MoU was signed on Monday in the presence of Energy Minister Captain Dibya Shankar Mishra. It was signed by GEDCOL Chief executive officer G R Das and Executive Director of NHPC R K Jaiswal.

Speaking on the occasion, Captain DS Mishra said efforts are on to encourage setting up of hydel projects in the state in place of thermal power stations to ward of environmental pollution.

The Minister said smokes emanating from thermal power stations devastate environment and ecology and added that massive tree plantation can be taken up to compensate the loss of forest due to construction of hydel projects.

The Minister said whosoever comes out with the proposal with solar power projects will be encouraged to do so and they will be welcomed.

The proposed solar power projects will be set up in 12 reservoirs on floating mode. Once these projects are initiated, it will generate nearly 500 MW electricity. The plan outlay for the project will be Rs 2500 cr. The completion of the project will be done in eight months.