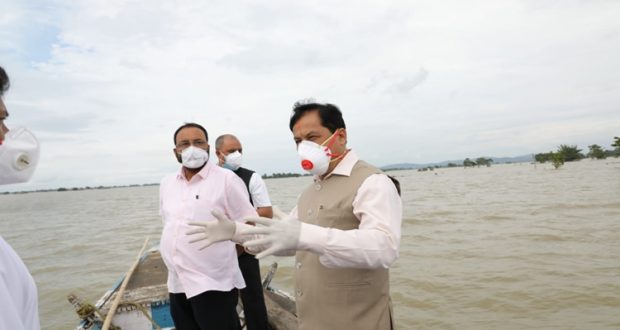 Flood situation in Assam has improved

in National July 19, 2020 Comments Off on Flood situation in Assam has improved 464 Views

Assam:19/7/20: In Assam, the flood situation in the state has improved today. However, 25 lakh people are still reeling under the fury of floods in 25 districts.

The death toll due to floods has gone up to 84. Chief Minister Sarbananda Sonowal visited Mayong revenue circle at Morigaon district today to assess the flood situation. He took a boat ride along with two ministers Keshab Mahanta and Pijush Hazarika.

Mr. Sonowal has also met people at relief camps. The Chief Minister said that relief measures are being taken by the government in a war footing manner.

Meanwhile, the Information and Public Relation Department of Assam detected a fake post in social media today which claimed that – the government has no funds to help people during floods and citizens could only help them.

2020-07-19
Editor in chief
Previous: CIPET Bhubaneswar has been accredited for testing and certification of PPE kit
Next: PM INTERACTS WITH IBM CEO ARVIND KRISHNA