The HLPF meets annually in July for eight days under the auspices of the Economic and Social Council (ECOSOC) of the UN. The VNRs presented by Member States at the HLPF are a critical component of the review of progress and implementation of the 2030 Agenda and the SDGs. The reviews are voluntary and state-led and are aimed at facilitating the sharing of experiences, including successes, challenges and lessons learned. The process of preparation of a country’s VNR provides a platform for partnerships, including through the participation of various relevant stakeholders. NITI Aayog prepared and presented India’s first VNR in 2017.

India presented its VNR along with other second time presenters like Bangladesh, Georgia, Kenya, Morocco, Nepal, Niger, Nigeria and Uganda. The presentation also included a short film which encapsulated the processual aspects of the second VNR and captured some of India’s major progress areas on the SDGs.

In his opening remarks, Dr Rajiv Kumar expressed his solidarity with all the countries which were grappling with challenges brought about by the pandemic, while highlighting the key features of India’s response to the pandemic under the Atma Nirbhar Bharat campaign. “We should all obliterate all divisions and distinctions amongst us and come together to try and convert the prevailing situation into an opportunity for accelerating our progress towards achieving the SDG targets”, said the Vice Chairman in his statement.

In his statement, Dr Kumar presented the efforts towards ensuring no one is left behind. He also dwelt on the remarkable progress India has achieved in reducing multidimensional poverty, providing food safety, ensuring education for all, universalising access to electricity, clean cooking fuel and sanitation, while also operationalising the world’s largest health insurance programme by covering 500 million citizens.

“We are deeply committed to building on existing efforts and undertake newer initiatives to accelerate progress on the SDG targets for long term transformation. In this endeavour, peer learning and knowledge sharing will play a key role -which we are actively fostering among States and Union Territories”, said Shri Amitabh Kant, CEO, NITI Aayog

India’s VNR this year has undertaken a paradigm shift in terms of embodying a “whole-of-society” approach in letter and spirit. NITI Aayog engaged with sub-national and local governments, civil society organizations, local communities, people in vulnerable situations and the private sector. As part of this process, NITI Aayog partnered with UN in India and Civil Society Organisations to curate a consultative process which saw more than 50 national and sub-national consultations with over 1000 CSOs from fourteen population groups including women, children, elderly, Persons with Disabilities (PWDs), People Living with HIV (PLHIV), among others .

“The role of international cooperation is more critical than ever before”, observed the Vice Chairman. He highlighted the leading role India has been playing in promoting global engagement platforms such as the International Solar Alliance (ISA), the Coalition for Disaster Resilience Infrastructure (CDRI), and the active participation in implementing the Sendai Framework, UN Convention to Combat Desertification (UNCCD) and the Paris Climate Agreement.

The presentation was followed by an interactive segment where Member States such as Ecuador and Bangladesh, and Civil Society Organisations put forth questions pertaining to areas of renewable energy, financial inclusion, and the Government’s future engagement strategy, respectively. 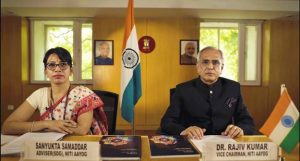 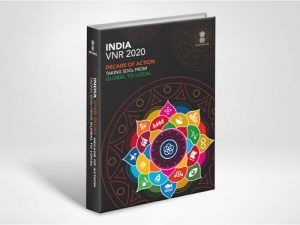 Decade of Action: Taking SDGs from Global to Local

The India VNR 2020 report was also unveiled during this event. The report is a comprehensive account of the adoption and implementation of the 2030 Agenda in India. Apart from presenting a review of progress on the 17 SDGs, the report discusses at length the policy and enabling environment, India’s approach to localising SDGs, and strengthening means of implementation.

The report also includes a chapter which draws from the rich body of data, knowledge and analysis that emanated from the CSO led community-centric consultations, which took place across the length and breadth of the country. The chapter presents a summary of the key concerns and the recommendations voiced by the stakeholders from civil society, non-governmental and community organisations. Similarly, the segment on business integration highlights the important role which businesses and the private sector are envisaged to have in the decade of action.

Leveraging science, technology and innovation for SDGs, and costing and financing of SDGs are the two levers of strengthening means of implementation which have been introduced this year.

In line with the theme of Taking SDGs from Global to Local, the goal-wise account of progress on the SDGs has been appended with examples of a range of diverse good practices and success stories of interventions from the States, especially Aspirational Districts.

NITI Aayog has the mandate of overseeing the adoption and monitoring of SDGs at the national and sub-national level. The India VNR 2020 represents NITI Aayog’s efforts in embodying the whole-of-society approach and its commitment towards localisation of the Sustainable Development Goals.