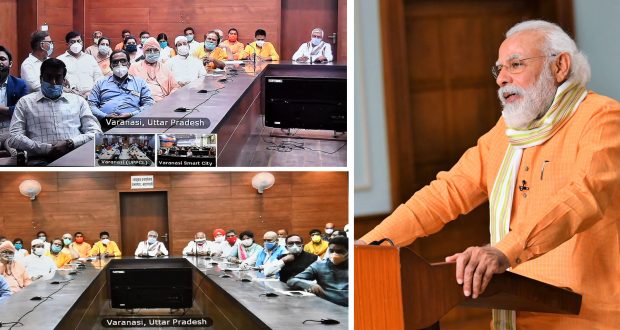 The Prime Minister, Shri Narendra Modi interacts with representatives from Varanasi based NGOs via video conference, in New Delhi on July 09, 2020.

Prime Minister praised the people of the holy & blessed city of Varanasi for brimming with hope and enthusiasm, notwithstanding the Corona Pandemic.

The Prime Minister said that there is an old belief that nobody in Kashi would sleep with hunger as the City is blessed by Maa Annapurna and Baba Viswanath.  The PM said that it is a great privilege for all of us that this time God has made us the medium of service to the poor.

Prime Minister said several experts questioned India’s capabilities to fight the pandemic, owing to its high population and many other challenges. He said the fear about Uttar Pradesh with a population of 23-24 crores could not mitigate the infection has been allayed due to the cooperation and the hard work of the people of the state. He expressed satisfaction that the pace of infection in Uttar Pradesh now has not only been controlled but those who have corona are also recovering fast.

He said that India, with twice the population of America, is serving them without taking a penny from them. And now this plan has been extended till the end of November, ie Deepawali and Chhath Puja.

Prime Minister said efforts are being made to alleviate various hardships being faced by various craftsmen, especially weavers, along with traders and businessmen of Varanasi. Prime Minister said various infrastructure and other projects worth Rs 8000 Crore are being implemented at a fast pace.

2020-07-09
Editor in chief
Previous: India is playing a leading role in the global revival: Narendra Modi
Next: Odisha’s Anketa Maharana aka Apsara Rani was the most searched name on the search engines