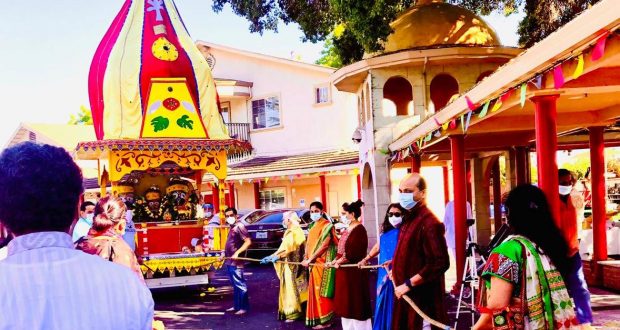 California:7/7/20: Fremont Hindu Temple, the first abode of Lord Jagannath in Bay Area, California, USA, hosted the annual Ratha and Bahuda Yatra on Saturday, June 27 and July 4, consecutively. The holy festival usually attracts thousands of devotees. This year, however, owing to the coronavirus pandemic, the Ratha Yatra was held in a restricted manner with a limited number of approximately 20 devotees with the heightened precaution of maintaining social distancing and wearing masks. For the thousands of devotees who could not join, a live telecast of the Ratha Yatra was organized which gave 7000 plus devotees the glimpses of the Holy Trinity on their TV, mobile phones and laptop.

Says Dr. Romesh Japra, Chairman of the Fremont Temple, “Due to the pandemic all of our programs such as Holi and Shivaratri were shut down. However, by Lord Jagannath’s grace, we could follow our annual tradition of completing rituals of Rath Yatra. Its a blessing for us that due to the efforts of the temple management and a handful of devotees this could be achieved.”  He appreciated the contribution by an Odia senior member and a committed devotee, the late Shri Deba Mohanty who was instrumental in initiating and starting the first Ratha Jatra in Silicon Valley, here at Fremont Hindu Temple. Shri Rajesh Verma, President of Fremont Temple echoed the same sentiments and invited devotees to participate in the Temple’s online activities.

Ratha Yatra rituals started by offering pooja to deities, “pahandi” to ratha followed by “chhera pahara” starting the preparatory rituals for readying the chariot for pulling. Radhika Saini from Nataraj School of Dance performed traditional Odissi dance in front of the chariot before the chariot was pulled by the devotees with Kirtan and Bhajan and the chants of “Jai Jagannath” led by Kirtan Mellows of Silicon Valley Iskcon temple.  Various prasads were prepared for the three lords and distributed amongst the devotees. Then the three lords were moved to “gundicha” temple and the rest of the rituals were performed over there. The rituals were rounded off with bhajans by Bay Area artiste Alka Bhatnagarji with our Odia singers and devotees and Tabla by Jasho that filled the environment with devotion. 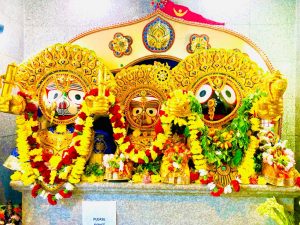 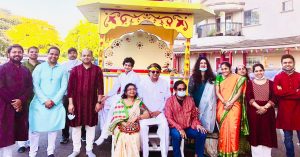 “This year Ratha Yatra and Bahuda Yatra were virtual and unusual. One of a kind memorable event that our devotees enjoyed from the safety of their homes and praying that the COVID- 19 pandemics will go away soon,” said Reena Patnaik and Mahesh Pakala, trustees of the Temple and members of the Odia community who coordinate/organize Ratha Yatra and other activities of Lord Jagannath parivaar at the Fremont temple. They are very grateful to the handful of devotees who came forward to participate despite the pandemic situation.

The Fremont Temple tried to keep the last 26 years of Ratha Yatra tradition alive amidst the coronavirus situation with the belief that “Jagatara Natha” will shower the blessings over the devotees across the world to overcome this pandemic. 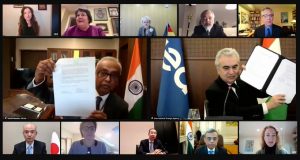 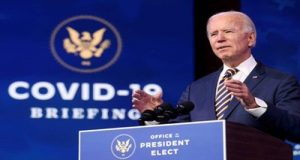 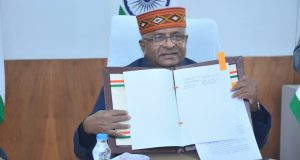 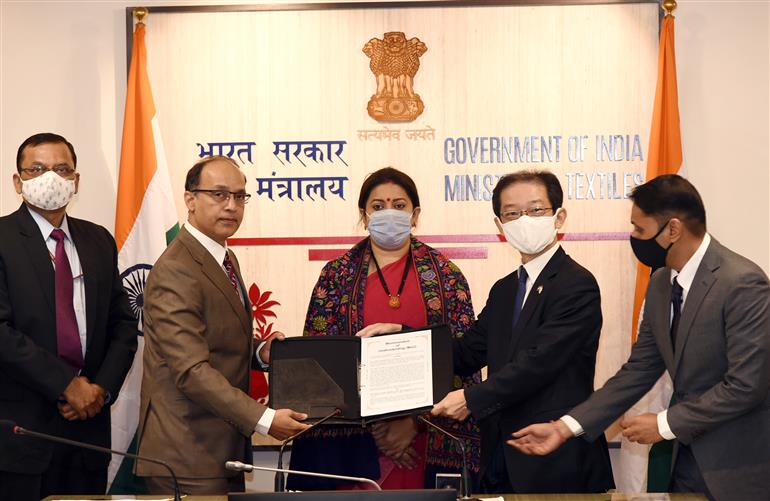 Newdelhi:27/1/21: A formal Memorandum of Understanding (MoU) signing ceremony was held between the Textiles Committee, Ministry of Textiles, Government of India and M/s. Nissenken Quality Evaluation Centre Japan,  through video, ...