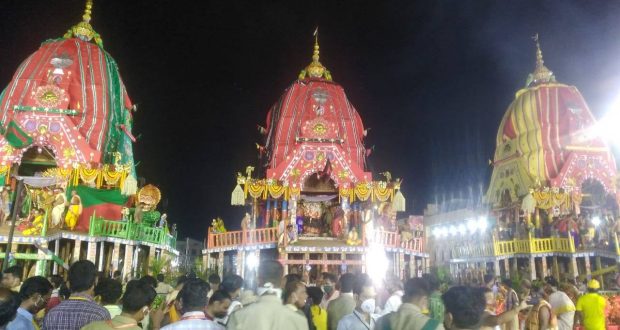 Puri:2/7/20: Lord Jagannath, his elder Lord Balabhadra and sister Devi Subhadra were Thursday adorned in gold ornaments on their respective chariots by the servitors as part of ‘Rajrajeswar Besa’ also known as ‘Suna Besa‘.

The administration had imposed a curfew and no devotee was allowed to witness the Suna Besa of the Lords owing to the Supreme Court directive in view of the COVID pandemic.

Normally, lakhs of devotees throng the pilgrim on this day to witness the ritual, the golden attire, of the three presiding deities of Srimandir on their respective chariots.

The trinity returned to the Singhdwar July 1 after spending nine days sojourn in the Gundicha temple, their aunt’s place and stayed the night on the chariots parked before the Lions’ Gate of the main temple. 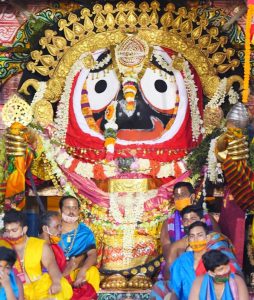 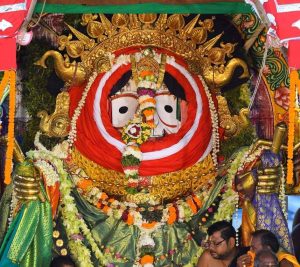 In the afternoon at about 4 pm process for Suna Besa began. Bhandar Mekap (assistant treasurer of temple) in presence of Pattajoshi Mahapatra, Deulakaran, Pratihari and temple police opened the Bahar Bhandar (outer treasury compartment) and brought out ornaments and jewelry of three deities kept in three separate boxes amid tight security and handed them over to the servitors on the three chariots with an acknowledgment of inventory they received. 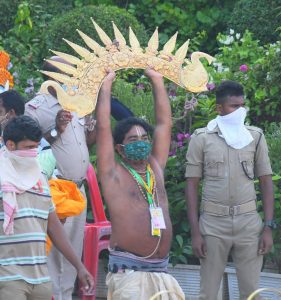 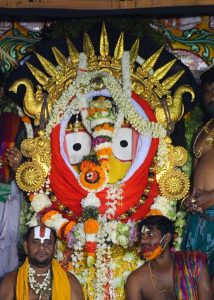 It took about one and a half hours from 4 pm to 5.30 pm to complete the Suna Besa decoration.

Apart from placing huge tiaras on their head and a number of necklaces of various sizes on their necks the deities were given limbs such as feet, hands, ear lobes and their insignias.

While Lord Jagannath was fashioned with conch and a chakra, Balabhadra was decorated with a gold plough.