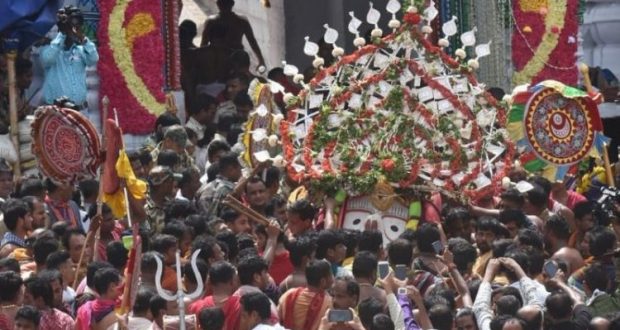 Puri:1/7/20: Bahuda Yatra, the homecoming of Holy Trinity, began with the first mega ritual ‘Pahandi’ (ceremonial procession of deities).After spending a week inside the Gundicha temple, the Holy Trinity will return to the Lions’ Gate of Srimandir on the occasion of Bahuda Yatra.

The ceremonial Pahandi ritual started with the beating of cymbals, conch shells and amidst shouting of “Hari Bol” and “Jai Jagannath” as the priests carried the deities. Lord Sudarshan, considered to be the pilot god, led the ceremonial procession as per the religious tradition. This was followed by the ‘Pahandi’ ritual of revered eldest brother Lord Balabhadra

As Lord Sudarshan and Lord Balabhadra have already reached their chariots, Devi Subhadra soon followed up the suit.

Lastly, Lord Jagannath will make way to the chariot.

After reaching Srimandir, the three chariots of the deities will be parked outside Singhadwara for rituals over the next three days. Suna Besha and Adhara Pana will be performed followed by the Niladri Bije (concluding part of the rituals of the Bahuda Yatra). These rituals will take place on July 2, 3, and 4, respectively.