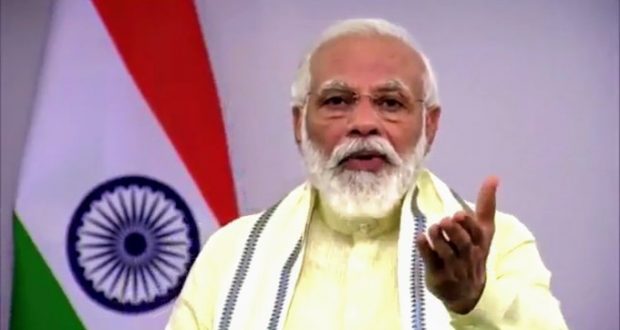 Helping hand to the poor

Prime Minister emphasized that the provision of food to those in need during lockdown has been the foremost priority of the country. As soon as the lockdown was announced, the government brought about PM Garib KalyanYojana, under which a package of Rs 1.75 lakh crore for the poor was announced.

Prime Minister observed that the enormity of the decision to provide free ration for three months to more than 80 crore people ie providing 5 kg free rice/wheat to each member of the family, along with providing 1 kg pulses to each family, per month, has made the entire world take notice. The number of people who were provided free ration is several times the population of many large countries, he said.

Prime Minister noted that with the commencement of the rainy season, most of the work takes place in the agriculture sector. Also, several festivals take place one after the other, including Guru Purnima, Rakshabandhan, Shri Krishna Janmashtami, Ganesh Chaturthi, Onam, Dussehra, Deepawali, Chhath Puja, among others. He announced that keeping in mind that requirements as well as expenditure increase during this time, the government has decided to extend PM Garib Kalyan Anna Yojana till Deepawali and Chhath Puja, ie the scheme will continue to remain applicable from July till the end of November. During this five-month period, more than 80 crores of people will be provided 5 kg free wheat/rice per month. Along with providing 5kg free rice/wheat to each member of a family, 1 kg free whole chana will also be provided to each family per month.

The government will spend more than Rs 90,000 crore towards the extension of the scheme, the Prime Minister said, adding that if the amount spent towards it in the previous three months is added together, a total of almost Rs 1.5 lakh crore would be spent towards the scheme. He credited and thanked the hard-working farmers and honest taxpayers for making it possible for the government to procure and distribute free foodgrains.

Prime Minister underlined that the country is moving towards the institution of ‘one nation, one ration card’, which will be of immense benefit to the poor who travel to other states in search of work.

Prime Minister noted that the shift of the fight against coronavirus to Unlock 2 coincides with the weather which results in several ailments. He asked everyone to take care of their health. He observed that due to timely decisions like lockdown, it has been possible to save the lives of lakhs of people and the death rate in the country is amongst the lowest in the world. However, irresponsible and negligent behavior has been on the rise during Unlock 1, he said, adding that earlier people were more careful about usage of mask, washing hands for more than 20 seconds several times during the day and maintaining ‘do gazdoori’. He emphasized that when more being more careful is necessary, the rise of negligence is a cause of concern.

Prime Minister said that regulations need to be followed with the same seriousness as during Lockdown, especially in the Containment Zones. He exhorted people to spread awareness amongst those not following such rules and regulations, giving examples of the Prime Minister of a country being fined Rs 13000 for not wearing mask in a public place. He said that local administration in India will need to act with same alacrity, since no one, including the Prime Minister, is above the rule of law.

Prime Minister said that in the coming times, the government will continue to take further steps to empower the poor and the needy. Economic activities will also be enhanced, with due precautions in place. He reiterated the pledge to work towardsAtmanirbhar Bharat and to be vocal for local, while also asking people to be careful, use mask/face cover and continue following the mantra of maintaining ‘do gaz doori’.

2020-06-30
Editor in chief
Previous: Handbook of Research on Social and Cultural Dynamics in Indian Cinema inducted topic on Odia cinema
Next: .PM chairs meeting to review planning and preparations for vaccination against Covid-19