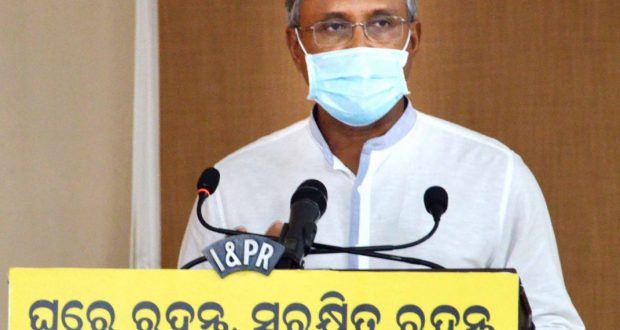 Bhubaneswar:30/6/20: The Odisha government Tuesday released the new guidelines for Unlock 2.0. Chief Secretary Asit Tripathy held a press conference and announced the new rules which will be applicable in the month of July.

The Chief Secretary said that the government has worked on the Union government’s guidelines on Unlock 2.0. Tripathy announced reducing the night curfew hours but said the weekly shutdown in districts where the number of coronavirus cases has gone up substantially will continue. The rules will come into effect from July 1.

Tripathy clarified that the older rules for COVID-19 in containment zones will go on as usual but spoke about some changes and liberty which will now be granted to the non-containment zones.

“We have revised the timings of night curfew. Now the night curfew will be imposed from 9.00 pm to 5.00 am,” Tripathy said.He also added, “All shops, commercial establishments, offices, institutions and movement of individuals shall remain closed/ prohibited between 9.00 pm to 5.00 am throughout the State, except for essential activities,”

The government also proposed a continuation of the weekly shutdown. The department said that 10 high burden districts will continue to observe the shutdowns. These districts are Ganjam, Gajapati, Khurda, Cuttack, Jajpur, Jagatsinghpur, Balasore, Mayurbhan, Keonjhar and Jharsuguda.

The Odisha government notification also said that restrictions will continue on certain activities as it had been during Unlock 1.0. Cinema halls, gyms, swimming pools, theatres, assembly halls will remain closed. Social, cultural, or political congregation will not be allowed during Unlock 2.0. International flights will remain suspended except those allowed by the Centre.

Tripathy also informed that hotels and restaurants will be allowed to operate as per the norms of the Union government. Restaurant services will be open for in house guests as per older norms.

“Restaurants and hotels are permitted for home delivery/ takeaways of food. Dhabas along with National and State Highways/ Major roads for takeaway only,” the new norms said.

On the matter of opening of shopping complexes, the government said that it has to be decided by the local authority based on the prevailing situation. The government clarified that there will no hindrance to inter-state and intra-state movement of passengers.

“There shall be no restriction on inter-state and intra-state movement of persons and goods. No Permission, approval, permit, passes will be required for such movements,” the notification said.

The government however has allowed the local authorities to impose more restrictions if required. The Chief Secretary said that in hotspot districts, Collectors can shut down markets, offices and transport if required based on assessment of local conditions.