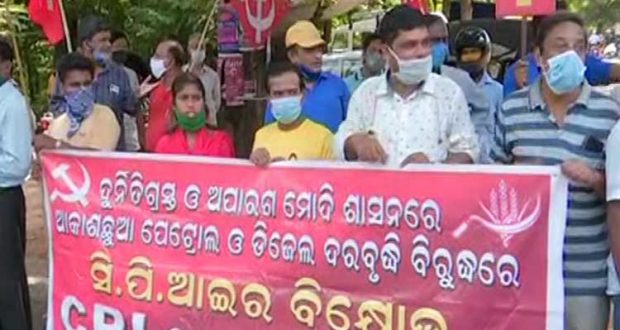 Bhubaneswar:30/6/20: Leading left parties staged a demonstration here on Tuesday against rising fuel prices and demanded immediate rollback of the hike, a day the Congress held a sit-in to press for reduction of petrol and diesel rates.

Workers and leaders of the CPI, CPI(M), CPI(ML) Liberation and All India Forward Bloc demonstrated at Master Canteen Square holding banners and placards, accusing the BJP-led government at the Centre of being insensitive and resorting to “forcible collection of taxes” from “helpless” people amid the COVID-19 pandemic.

“The manner in which the fuel prices have been hiked recently shows that the Narendra Modi government is utterly insensitive towards the sufferings of people, whose financial backbone has been broken because of the coronavirus outbreak,” CPI state secretary Asish Kanungo said.

Noting that repeated and “unjust” hike in fuel rates have a cascading impact on different sectors, the Left party leaders said it has led to a considerable increase in prices of essential commodities, compounding the miseries of the common people.

“Since June 7 till June 24, the central government has consecutively increased the prices of petrol and diesel, leading to a further hike of Rs 10.48 per litre for diesel and Rs 8.50 per litre for petrol,” they said.

While crude oil prices have gone down over the last few months, fuel prices skyrocketed in India as the Centre seeks to “indulge in extortion”, the Left party leaders alleged.

Demanding immediate measures for the rollback of the hike in fuel rates, they also sought a special financial package for people in view of the COVID-19 crisis.