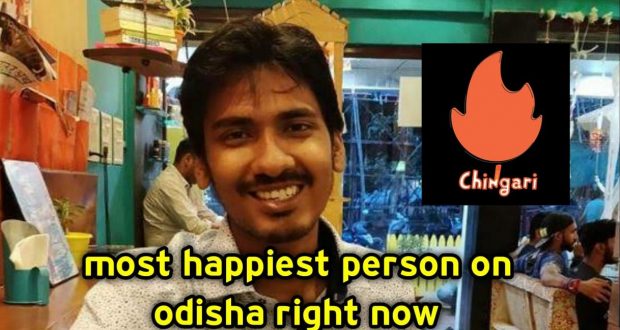 While we might be aware of Chingari app, many are unaware of the founder of the app. The app has been co-founded by and developed by Biswatma Nayak a resident of Adaspur area in Cuttack district of Odisha. Nayak is also the CEO of the company. Taking about his background, Biswatma Nayak has passed his matriculation from Prachi Academy, Adaspur. Then he completed his +2 from Royal College of Science and Technology. After completing his +2 he joined ITER, SOA University in Bhubaneswar and passed the engineering degree from the university.

Sources said the app is designed by Nayak and his college programmer Siddharth Gautam. The duo designed the app in Bengaluru in the year 2019.

The app is witnessing nearly 1 lakh downloads and over 2 million views per hour since the government banned the Chinese apps. It has already been downloaded over 3 million times. Chingari allows a user to download and upload videos, chat with friends, interact with new people, share content, and browse through feed.

The primary difference between Chingari and Tik Tok is that the former pays a content creator on the basis of how viral the video becomes. For every video that you upload on the Chingari app, you get points (per view) which can be redeemed for money.

So, unlike Tik Tok, Chingari is rewarding for creators as they don’t just get fame but also money for the content they upload on the app.

Biswatma Nayak, Co-founder of the Chingari App, said, “Prime Minister Narendra Modi has given us the clarion call of Vocal for Local and Chingari has been developed completely in India”.

“It is the best replacement for video entertainment apps by foreign firms. Chingari isn’t a clone of some foreign app but has been designed in keeping with the needs of Indian users”, added Nayak.

2020-06-30
Editor in chief
Previous: .PM chairs meeting to review planning and preparations for vaccination against Covid-19
Next: Odisha government released the new guidelines for Unlock 2.0