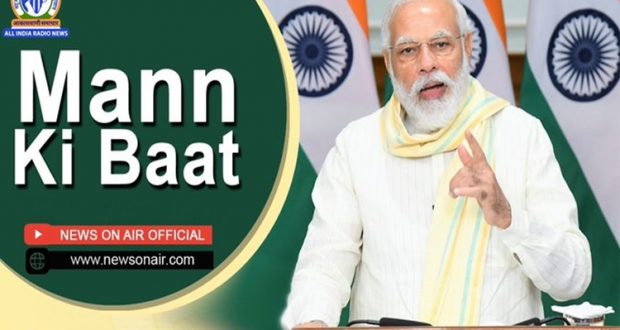 Newdelhi:28/6/20: Prime Minister Narendra Modi has said that the world has noticed India’s commitment and might when it comes to safeguarding its sovereignty and territorial integrity. He said those who cast an evil eye on Indian soil in Ladakh have got a befitting response. Sharing his thoughts through Mann Ki Baat Programme on All India Radio today, Mr Modi said, India honours the spirit of friendship and it is also capable of giving an appropriate response to any adversary.

The Prime Minister stated that our brave soldiers have proven that they will not let anyone cast an evil eye on the glory and honour of Mother India. Mr Modi said, the nation bows in reverence to the bravery of the jawans who attained martyrdom in Ladakh. Just like their family members, every Indian painfully regrets the loss. The Prime Minister said the inner sense of pride that families feel on the supreme sacrifice of their brave sons constitutes the true power of the country.

Mr Modi mentioned about the father of Shaheed Kundan Kumar of Bihar, who had spoken about sending even his grandsons to the army to defend the country. He said, this spirit permeates across all martyr families and is worthy of veneration. Mr Modi told that the resolve with which the jawans made the supreme sacrifice for the security of Mother India, should be the aim of our lives. He called for enhancing the country’s capabilities and capacities in safeguarding the borders.

The Prime Minister said a self-reliant India would be a tribute to the Martyrs in the truest, deepest sense. Mr Modi underlined the importance of defence sector preparedness. He said, after independence, we should have made efforts in the defence sector, taking advantage of the prior experience, but we did not. The Prime Minister told that today, in the fields of defence and technology, India is taking strides towards self-reliance.

The Prime Minister said, no mission can be successfully achieved without people’s participation. He urged the citizens to strive for a self-reliant India with their collective resolve, commitment and support. Mr Modi said, when people buy local, become vocal for local they play a role in strengthening the country. He added that this too, in its own way, is service to the nation. Mr Modi said India’s solemn resolve is to safeguard its honour and sovereignty. He emphasized upon India’s aim as a self-reliant nation, the tradition of trust and friendship and the spirit of brotherhood. He said the Country shall keep moving ahead abiding by these principles.

The Prime Minister reminded people that the country has moved out of the lockdown phase to the unlock phase of Corona crisis. He said, during this unlock period, one will have to focus deeply on two points – defeating corona and strengthening the economy and bolstering it. He told that during the unlock period, people have to stay more vigilant compared to the lockdown period and only their ness can save them from corona. He said, during the corona pandemic, people have to protect themselves from different diseases also. He suggested keeping using Ayurvedic medicines, herbal decoction and hot water to stay healthy.

Mr Modi said, during this unlock phase, many other things are getting unlocked, which had hitherto, shackled the country for decades. He said, for years the mining sector, space and agriculture were in a state of lockdown. Now the decisions taken by Government have unshackled the bottlenecks and given a boost to these sectors. He referred to commercial auction in mining, opening up of space sector and reforms in agriculture towards a self-reliant India with advancement of technology. Mr Modi said, there are many such sectors in which, amidst, all crises, the country is opening up new avenues of development through historic decisions.

Citing an article, the Prime Minister said, during the Corona pandemic, the demand for spices including ginger, turmeric and other spices has increased not only in Asia but also in America. He said, the entire world is focused on increasing their immunity at this time, and these immunity-enhancing ingredients are linked with India. He said we should be able to communicate about it in easy and simple language to the people across the globe for a healthier planet.

Mr Modi said Monsoon has now reached large parts of the country and meteorologists are very enthusiastic about the rains and are full of hope. He said, if the rains are bountiful, the farmers will reap a bumper harvest and the environment will also be green. Mr Modi urged people to practice rainwater harvesting in a big way to protect the environment. He mentioned about octagenarian farmer Kamegowda of Mandavali, Karnataka who is building new ponds in his area. He said,  till now, Kamegowda has dug 16 ponds, through his hard work. Mr Modi also mentioned about Vadodara where district administration and the local residents together organized rainwater harvesting in one thousand schools.

The Prime Minister also urged people to make eco-friendly Ganesh statues during Ganesh Chaturthi. Talking about traditional games like Pachisi, Moksha Patam and Gutta, Mr.Modi requested the grandparents and the elders of the house to handover these games to the new generation. He said in order to strike a balance with the advent of online gaming, they must do so for the sake of the children. Mr Modi called upon people to present the traditional Indoor Games of India in a new and attractive avatar. The Prime Minister said people have to remember that, the Indian sports are also local, and we have already pledged to be vocal for local. Mr Modi paid homage to former Prime Minister P V Narasimha Rao whose birth Centenary year began today. He said the former Prime Minister led the country through a critical phase.

Mr Modi said, historically, India has always emerged brighter and stronger, ensuring victory over all kinds of disasters and challenges. He said India will not only do better in this year 2020 but will move forward and will touch new heights. The Prime Minister expressed confidence that 2020 will give a new direction to India in this decade.