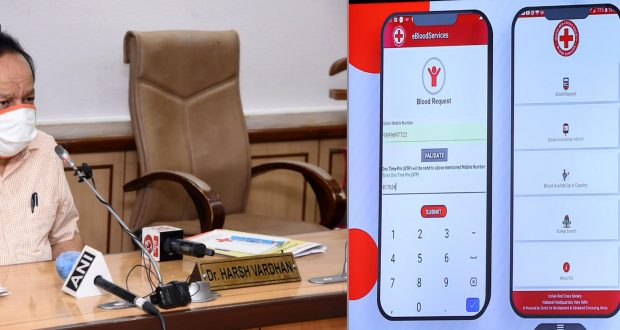 Newdelhi:25/6/20: Dr. Harsh Vardhan, Union Minister of Health & Family Welfare launched the ‘eBloodServices’ mobile App developed by The Indian Red Cross Society (ICRS), here today, through a video conferencing. The Union Health Minister is also the Chairman of the Indian Red Cross Society. This application is developed by the E-Raktkosh team of Centre for Development of Advanced Computing (CDAC) under the Digital India scheme launched by Prime Minister Shri Narendra Modi in 2015. Dr. Harsh Vardhan said, “In keeping with the people-centered vision of the Hon. Prime Minister, Digital India has now become an integral part of every person’s daily life.

Once the request is placed through the app, the requisite units become visible to IRCS, NHQ blood bank in its E-Raktkosh dashboard and this allows assured delivery within the specified time. This feature will make it easy for a blood seeker to obtain blood & shall bring the added advantage of complete transparency & single window access to the service.

The NHQ Blood Bank conducted 55 blood donation camps collecting 2896 units of blood. A total of 5221 units were collected during the lockdown period. Blood has been issued to 7113 patients, including 2923 thalassaemic patients as well as to Government hospitals such as AIIMS Delhi (378 units) and Lady Hardinge (624 units).

2020-06-25
Editor in chief
Previous: Minister of Petroleum and Natural Gas & Steel along with the CM of Odisha inaugurated a Product Application & Development Centre through video conference
Next: Bhubaneswar records 38 fresh COVID-19 cases in last 24 hours