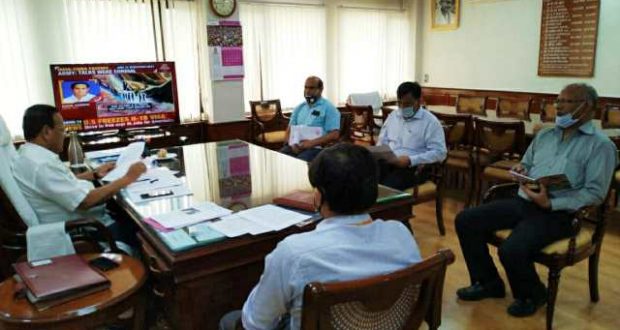 Talcher Fertilizers Limited is bringing up urea unit of 12.7 Lakh MT per annum capacity at Talcher, Odisha. It is a Joint Venture Company (JVC) promoted by GAIL, CIL, RCF, and FCIL. When completed it will be first of its kind in India to employ coal gasification technology for production of urea. The estimated cost of the project is around INR 13,270 crore. The successful completion of the project will reduce India’s dependency on imported urea, and is expected to create hundreds of direct and indirect employments.

During the meeting Shri S.N. Yadav, MD briefed about the status of progress of the project and various challenges being faced during execution of the project due to the COVID-19 crisis. He said that work has started since May and has gathered pace. However, due to issues such as travel restrictions and shortage of laborers the project has got delayed by about six months as of today. He assured that the project will be commissioned at the stipulated deadline.

Minister said that the COVID situation may have delayed the execution of the project at present, we must, however, be prepared to compensate current delay by faster execution in the future so that the project is commissioned by deadline i.e., September 2023. When commissioned TFL along with the other four revival projects at Ramagundam, Gorakhpur, Barauni and Sindri will be able to realise the vision of Prime Minister to achieve self-sufficiency in urea production.

2020-06-23
Editor in chief
Previous: With 167 new COVID-19 cases, Odisha on Tuesday taking the tally to 5,470
Next: Ministry of AYUSH has asked Patanjali Ayurved Ltd to stop advertising Coronil