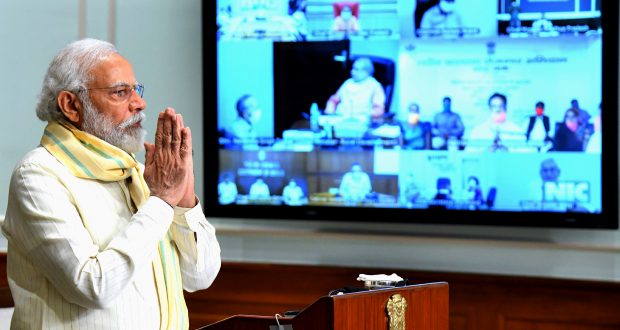 The Prime Minister, Shri Narendra Modi at the launch of the Garib Kalyan Rojgar Abhiyaan through Video-Conferencing, in New Delhi on June 20, 2020.

Prime Minister interacted through remote video conferencing with the villagers of Telihar in the Khagaria District of Bihar from where the Prime Minister Garib Kalyan Rojgar Abhiyaan was formally launched.

Prime Minister inquired from some of the migrants their current state of employment and also whether the various welfare schemes launched during the Lockdown period were available to them.

Shri Modi expressed satisfaction after his interaction and pointed out how rural India stood its ground in the fight against COVID-19 and how it is providing an inspiration to the whole country and the world in this moment of crisis.

PM said that both the Center and the State Governments were concerned about the welfare of the poor and the migrants.

The Prime Minister said the AatmaNirbhar Bharat Campaign itself was launched with a 1.75 Lakh Crore package under PM Garib Kalyan Yojana.

He said the Central and State Government also ran special Shramik Express Trains for the migrant labor who wished to return homes.

PM termed this day as a historic day as a massive campaign kickstarted for the welfare of the poor, for their employment.

This campaign is dedicated to our labor brothers and sisters, for the youth, sisters and daughters living in our villages. It is our endeavor that through this campaign workers and workers are given work near home, he said

The Prime Minister announced that an amount of Rs 50,000 Crores would be spent for building durable rural infrastructure under the Garib Kalyan Rojgar Abhiyaan.

He said 25 work areas have been identified for employment in villages, for development of various works. These 25 works or projects are related to meet the needs of the villages like rural housing for the poor, Plantations, provision of drinking water through Jal Jeevan mission, Panchayat Bhavans, community toilets, rural mandis, rural roads, other infrastructure like Cattle Sheds, Anganwadi Bhavans etc.

The Prime Minister said that Abhiyan shall also provide modern facilities in rural areas. He said it is of great necessity that high speed and cheap internet be provided in every rural household to help the youth and children. The Prime Minister said it is the first time that the rural areas are using more internet than the urban areas. Hence the laying of fibre cable and provision of internet are also made a part of the Abhiyan.

The Prime Minister said that Self-Reliant  (AatmaNirbhar) farmers are equally essential for a Self-Reliant India (AatmaNirbhar) Bharat. He said the Government took a major step by removing various shackles of unwanted rules and regulations so that the farmer can freely sell his produce anywhere in the country and connect directly with traders who offer a better price for his produce.

Shri Modi said the farmers are being directly linked to the market and that the Government has provided an investment of Rs 1,00,000 Crore for linkages like cold storage etc.

This Abhiyaan of 125 days, will work in mission mode, will involve focused implementation of 25 categories of works/ activities in 116 districts, each with a large concentration of returnee migrant workers in 6 states of Bihar, Uttar Pradesh, Madhya Pradesh, Rajasthan, Jharkhand and Odisha. Public works to be undertaken during this campaign will have a resource envelope of Rs. 50,000 crores.

The Ministry of Rural Development is the nodal Ministry for this campaign and the campaign will be implemented in close coordination with the State Governments. Central Nodal Officers of the rank of Joint Secretary and above will be appointed to oversee the effective and timely implementation of various schemes in the identified districts.

List of states, where the GKRA will be undertaken

The list of 25 works & activities targeted to be taken up on priority are mentioned in the following table:

2020-06-20
Editor in chief
Previous: Ship owners worldwide invited to now flag their ships in India to take advantage of the Make in India policy
Next: 19 persons have tested positive for novel Coronavirus in Bhubaneswar Municipal Corporation