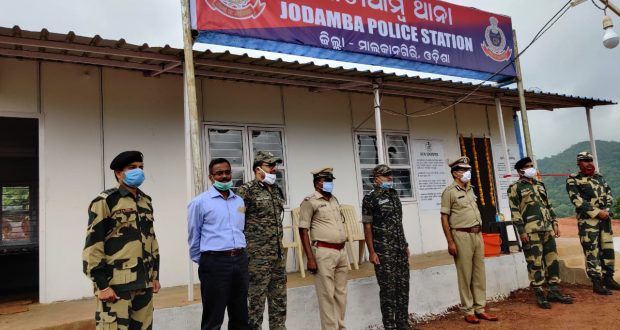 Abhay made the Jodambo Police station functional from Jodambo gram panchayat and also laid the foundation stone of its new building. He interacted with the senior officers and troops of BSF, IR Battalion.

He also reviewed the developmental activities going on in the area initiated after the opening of the Gurupriya Bridge. Malkangiri District is among the 35 “most LWE affected districts” in the country.

In Malkangiri district, Swabhiman Anchal (Cut-Off area) used to be the worst affected.  Over the last six months, establishment of COB in the month of December, 2019 at Hantalguda and another COB at Darlabeda in the month of March, 2020 has plugged the security vacuum in the area to great extent.

As a step forward in the composite counter – LWE initiatives, Jodambo Police station has been opened today  in Swabhiman Anchal of Malkangiri district. It will provide service to the people of five Gram Panchayats of the area i.e Jantri, Andrapalli, Panasput, Jodambo and Gajalmamudi and facilitate uninterrupted developmental activities in the area. This will also facilitate effective counter – LWE operation in the area and help instill a sense of safety and security for the people of the area.