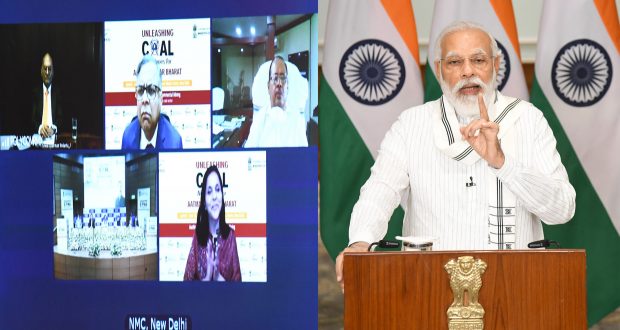 The Prime Minister, Shri Narendra Modi addressing at the launch of the auction process of Coal blocks for Commercial mining through video conference, in New Delhi on June 18, 2020.

Newdelhi:18/6/20: Prime Minister Shri Narendra Modi launched the auction process of 41 coal blocks for commercial mining through video conference from here today. It was part of the series of announcements made by the Government of India, under the AatmaNirbhar Bharat Abhiyan. The Coal Ministry in association with FICCI launched the process for auction of these coal mines. A two-stage electronic auction process is being adopted for the allocation of the coal mines.

Speaking on the occasion, Shri Narendra Modi said that India will overcome the COVID -19 Pandemic and the nation will turn this crisis into an opportunity. He said that this crisis has taught India the lesson of becoming  AatmaNirbhar, i.e. Self-Reliant. He said an AatmaNirbhar Bharat means reducing dependency on imports and saving foreign currency on imports. It entails that India develops resources domestically so that the country does not have to rely on imports. It also means becoming the biggest exporters of the commodities that we now import.

To achieve this, the PM said that each sector, each product, each service, should be kept in mind and worked holistically, to make India self-reliant in a particular area. He said a major step taken today will make India self-reliant in the Energy sector. He said that this event marks not only the implementation of reforms concerning one Coal Mining Sector but also marks the beginning of lakhs of employment opportunities for the youth. He said that today we are not only launching the auction of commercial coal mining today but also freeing the coal sector from decades of lockdown.

He stressed the irony that India, with the world’s fourth-largest coal reserve and is the second-largest producer, is also the second-largest coal importer. He said the situation has lasted for decades now and the coal sector was kept entangled in the mesh of Captive and Non Captive mines. He added that the sector was excluded from competition and transparency was a big problem. Owing to this, he said, the coal sector lacked investment and its efficiency was also questionable.

The Prime Minister wished that India will come out of this crisis as it had come out of a much bigger crisis in the past. PM exuded confidence that India can become AatmaNirbhar and the success and growth of India are certain. He also cited how a few weeks ago how most of our demand for N-95 masks, Corona testing kits, PPE, and Ventilators were met by imports are now fulfilled through Make In India. He also expressed his confidence that very soon we will become an important exporter of medical products. He requested people to keep up their faith and morale so that we can make Aatmanirbhar Bharat.