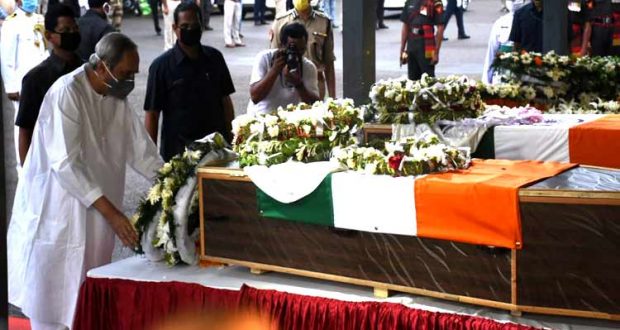 in State News June 18, 2020 Comments Off on Odisha Governer and CM paid last respects to the mortal remains of two Odia soldiers. 396 Views

They were martyred in the Ladakh Galwan Valley following  clash with Chinese soldiers.

The Odisha Governor and Chief Minister paid floral tributes to the two brave soldiers after the mortal remains of Chandrakant Pradhan and Nanduram Soren arrived at the Biju Patnaik International Airport from New Delhi in a special flight this evening.

The BJP MP from Bhubaneswar Aparajita Sarangi and BJD MP from Kandhamal Achyuta Samanta also paid their last respects to the two martyrs.

The bodies of the two soldiers will be taken to their respective villages where their last rites will be performed with full state honours.

Chandrakant Pradhan of Biarpanga village under Raikia block of Kandhamal district and Nanduram Soren of Badachampauda village of Mayurbhanj district were martyred during a violent clash with Chinese troops in Galwan valley in the intervening night of June 15 and 16.

2020-06-18
Editor in chief
Previous: Union Minister of Health & Family Welfare launched India’s first mobile I-Lab
Next: Odisha government said it will abide by the order given by the Supreme Court on Ratha Jatra this year