Top Headlines
Home » National » Economy is returning on track of normalisation after two weeks of the first phase of unlock: PM Modi 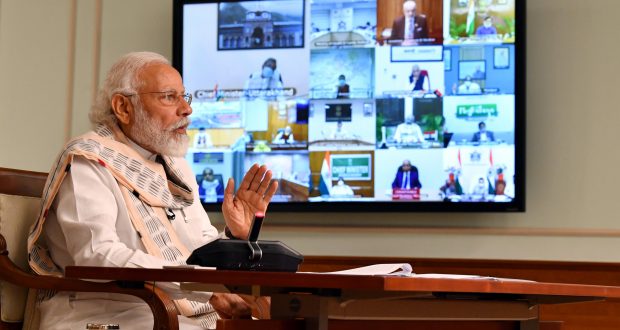 The Prime Minister, Shri Narendra Modi interacting with the Chief Ministers via video conferencing to discuss the situation emerging post Unlock 1.0 and plan ahead for tackling the COVID-19 pandemic, in New Delhi on June 16, 2020.

Economy is returning on track of normalisation after two weeks of the first phase of unlock: PM Modi

Newdelhi:16/6/20: Prime Minister Narendra Modi has affirmed that the economy is returning on track of normalisation after two weeks of the first phase of nationwide unlock. In his opening remarks during his interaction with the Chief Ministers of 21 States and Union Territories through video conference today, Mr. Modi appealed to chief ministers to turn crisis into opportunity. He said the views and the experiences of all states and Union Territories will be discussed to strategize future roadmap of nation’s fight against the global pandemic. He highlighted the timely decisions taken by the government and early preparedness approach which helped the country to chalk out measures to save many lives.

Mr Modi said, when India’s fight against COVID19 will be analysed in future, this time will be remembered for how the Centre and States worked together in fighting the pandemic. He said, it served as an example of cooperative federalism. Prime minister said, in last few weeks, thousands of Indians returned to India from abroad and hundreds of migrant workers reached their home towns.

The Prime Minister said that even a single loss of life due to COVID is saddening and the nation should not lower it’s guard even during the unlock. He urged every citizen to strictly follow all necessary precautions including wearing mask, maintaining Do Gaj ki Doori and washing hands regularly with soap.

Highlighting the recovery rate of over 50 per cent from COVID-19, Prime Minister Modi said, many countries are discussing the steps taken by the Indian Government during the lockdown which helped achieve an infrastructure which has been able to treat a large number of patients efficiently.

Mr. Modi highlighted the increased sale of fertilizers, larger year on year sowing of Kharif Crops and Digital payments in retail sector as few benchmarks. Mr Modi also mentioned the historic reforms introduced by the government, including to provide automatic collateral free loans to MSMEs and to boost agrarian economy as measures which will ensure creation of strong and sustained demand in the country.

AIR correspondent reports that Mr Modi held a detailed meeting with senior ministers and officials, including Home Minister and Health Minister on 13th of this month to review India’s response to Covid-19 pandemic.

The meeting assumes significance in the wake of the rising number of novel coronavirus cases in the country. This is the sixth meeting of the Prime Minister with the chief ministers since the announcement of nationwide lockdown in March.

Currently, the country is under the fifth phase of the lockdown which entails much more relaxations than the previous ones. Under Unlock 1.0, the Centre and state governments have eased several restrictions for the convenience of public and businesses to ensure that economic activities gather momentum.

The Chief Ministers thanked the Prime Minister for his leadership during such a challenging time and uniting the country to fight for the collective fight against the virus. They provided feedback about existing health infrastructure in their states and efforts for augmentation to tackle the impact of the virus. They mentioned about the awareness campaigns being run by them, help being provided to workers who have returned home, usage of Aarogya Setu app, and kickstarting of economic activities in the states.

Home Minister Shri Amit Shah said that while the country has so far fought a successful battle against the pandemic, the road ahead is long and suggestions given by the Prime Minister regarding use of mask and face cover, maintaining do gaz doori etc should be followed by all.

Prime Minister had held a detailed meeting with senior ministers and officials on 13th June to review India’s response to Covid-19 pandemic. The meeting had reviewed the national level status and preparation in the context of the pandemic.