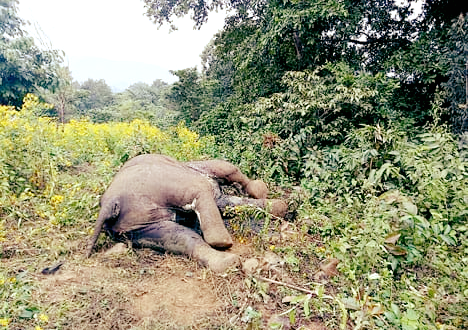 Carcasses of two elephants have been recovered from Gurubeda Reserve Forest

Keonjhar:14/4/20: The carcasses of two elephants have been recovered from Gurubeda Reserve Forest under Joda Forest Section in Champua Range of Keonjhar district on Sunday.

According to reports, the personnel of Joda Forest Range has seized the carcasses of a female jumbo and a tusker while a probe is underway to ascertain the actual cause leading to their death.

Sources said some locals had informed media personnel who then intimated Champua Ranger about the carcasses of the elephants. Following this, Champua Ranger and Joda Forest Guard reached the spot for inspection.

Forest officials informed that the female jumbo was around 20-year-old and the carcass seemed to be lying there for more than a week. Besides, the tusker, which was nearly 22-year-old, was killed three days ago and the tusks were also missing.

miscreants might have killed the pachyderm for the tusks, is it alleged. A detailed probe into the killing of the elephants would reveal whether it was a natural death of the elephant was hunted for its tusks, the locals stated

2020-06-14
Editor in chief
Previous: HC directed the state government deploying machinery or other means like elephants to pull the chariots
Next: Puri:14/6/20:Preparation for Car Festival:Puri Ratha Khala