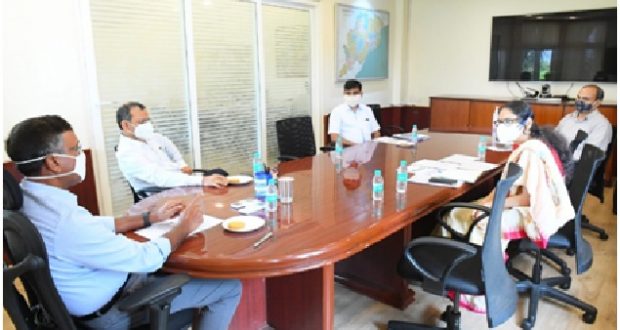 Odisha Government has initiated the process for renovating the urban hats

in Smartcity Bhubaneswar, State News June 11, 2020 Comments Off on Odisha Government has initiated the process for renovating the urban hats 1,172 Views

Bhubaneswar11/6/20:: As another boost for facilitating marketing of the handloom, textile and handicraft products in the post-lockdown scenario, the Odisha Government has initiated the process for renovating the urban hats, presently operating at Bhubaneswar, Konark and Puri. A high-level meeting to this effect was held under Chairmanship of Chief Secretary Asit Tripathy in Lok Seva Bhawan conference hall today.

Reviewing the current scenario, the Odisha Chief Secretary directed to renovate the urban hats to the points of tourist attraction in these places. He further directed to develop the spots through the convergence of tourism, cultural and handicraft activities.

Adding to Chief Secretary, Development Commissioner Suresh Chandra Mohapatra advised providing space to traditional craftsmen for exhibiting and selling their products throughout the year directly to the domestic and international customers.  Sri Mohapatra added that this would give wider exposure to the artisans and fetch more income against their own products. They would also get a direct sense of the customers’ choice and demand.

It was decided in the meeting that Textile. Handloom and Handicraft department would maintain and upscale these hats to attractive commercial spots for their products. Participating in the discussion, Chief Managing Director IDCO Sri Sanjay Kumar Singh apprised, “Urban hat at Bhubaneswar has been built over on area of 5 acres of land with around 50 stalls, one amphitheater, two green rooms, 10 food stalls and one toilet. The hat at Puri has been built over an area of 6.83 acres with 36 stalls, one amphitheater, two green rooms, two dormitories and one toilet. The hat at Konark developed over 4.15 acres has 40 stalls, four exhibition halls, one amphitheater, two green rooms, one utility building, one toilet and one dormitory”. All these hats are presently operating and are being maintained by IDCO.