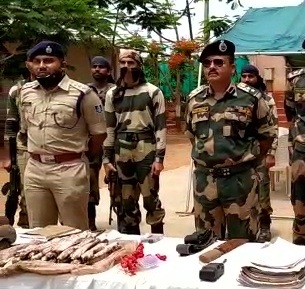 Jeypore, June 11: The Boipariguda police and BSF 151 Battalion Jawans conducted an operation in the jungles near Gupteswar in Koraput district and seized huge quantity of explosives and Maoist literature and other articles from the spot, police said.

The Jeypore SDPO addressing a Press meet said that all these items were seized from an abandoned hole at Kenduguda near Gupteswar.

The SDPO said that anti-Maoist operation was launched based on reliable inputs and the police personnel seized a rifle, a huge quantity of explosives, and a Maoist pamphlet. However, it is suspected that the Maoists were planning for an attack.