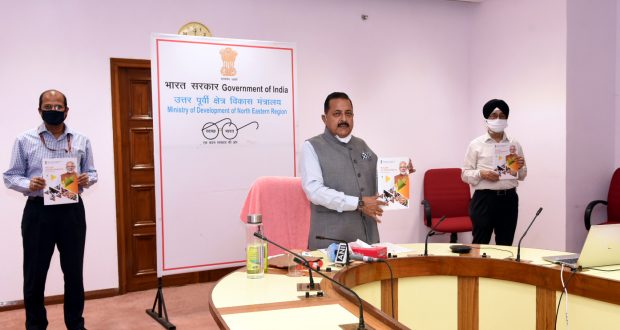 The Minister of State for Development of North Eastern Region (I/C), Prime Ministers Office, Personnel, Public Grievances & Pensions, Atomic Energy and Space, Dr. Jitendra Singh launching a Booklet and its e-version on one year achievements of the Ministry of Department of Development of North Eastern Region, in New Delhi on June 06, 2020. The Secretary (DoNER), Dr. Inder Jit Singh is also seen.

Union Minister Dr. Jitendra Singh launches Booklet and its e-version on one year achievements of Ministry of DoNER under Modi Government 2.0

New Delhi:6/6/20: Union Minister of State (Independent Charge) Development of North Eastern Region (DoNER), MoS PMO, Personnel, Public Grievances & Pensions, Atomic Energy and Space, Dr. Jitendra Singh today launched a Booklet and its e-version on one-year achievements of the Ministry of Department of Development of North Eastern Region, MDoNER here. Secretary Ministry of DoNER and other senior officers of the Department were present on the occasion. Secretary NEC and other senior officers attended the launch through a Video Conference from Shillong.

In his address, Dr. Jitendra Singh said that North Eastern Region has emerged as a role model in more than one way. After emerging as a successful model for development in the last six years, the region has also become a role model in Corona management and again by reverting back to normal working conditions, it has presented a model for the entire country to emulate the same. Dr. Singh said that this has become possible due to priority and patronage, the North Eastern Region received by Prime Minister Narendra Modi Government in the last six years.

Dr. Jitendra Singh congratulated the team MDoNER for achieving 100% expenditure during 2019-20 and said that there has been a significant development in terms of Road, Rail, and Air connectivity, helping facilitate the movement of goods and persons not only across the region but also across the country. So far, the region has received more than 400 tonnes of Air Cargo supply, apart from parcel facilities. He said that Bamboo will get a special impetus in the post COVID era and the region will witness young entrepreneurs making a mark in different fields.

Union Minister congratulated the team MDoNER for achieving 100% expenditure during 2019-20.  He also appreciated the efforts of the Ministry for helping North Eastern States in developing Infrastructure for fighting COVID-19 and playing a coordinating role between NE States and various Central Ministries/Department, in various issues which required interventions by Central Ministries/Departments. He asked the Officers to maintain the tempo and keep up the good work.