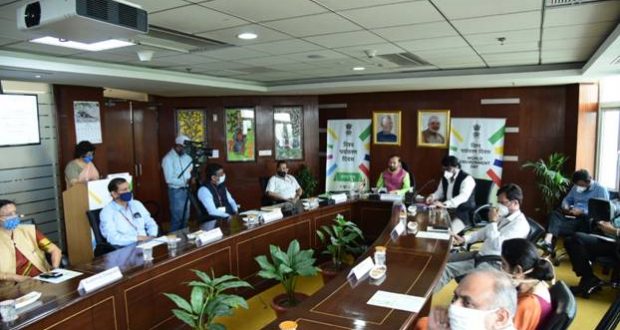 New Delhi:5/6/20: On the occasion of World Environment Day, the government today announced implementation of the Nagar van scheme to develop 200 Urban Forests across the country in next five years with a renewed focus on people’s participation and collaboration between Forest Department, Municipal bodies, NGOs, Corporates and local citizens. World Environment Day (WED) is celebrated on 5th June every year.  Ministry of Environment, Forest & Climate Change celebrates WED focusing on the theme declared by United Nations Environment Programme (UNEP) and organizes several events.  This year’s theme is ‘Biodiversity’. In view of the prevalent situation due to COVID-19 pandemic, the ministry held virtual celebrations of World Environment Day on this year’s theme with focus on Nagar Van (Urban Forests).

Releasing a brochure on the best practices on Urban Forests and announcing the Nagar Van scheme, Union Environment Minister, Shri Prakash Javadekar said that these forests will work as lungs of the cities and will primarily be on the forest land in the City or any other vacant land offered by local urban local bodies. Stressing on this year’s theme i.e. “Time for Nature” with special focus on biodiversity, Shri Javadekar said, “thumb rule is that if we protect nature, nature protects us” .

A film was played during the Environment Day Celebrations today which narrates how the initiatives of Punaikars along with Forest Department and local body has converted 16.8 ha of a barren hill into green forests. Today, the forest is rich in biodiversity with 23 plant species, 29 bird species, 15 butterfly species, 10 reptiles and 3 mammal species. This Urban Forest project is now helping maintain ecological balance, serving both environmental and social needs. The Warje Urban Forest is now a role model for the rest of the country.

Stressing on this year’s focus on Biodiversity the Environment Minister said,“India has 8 percent of world’s biodiversity, despite having many constraint like only 2.5 % of the world’s landmass, has to carry 16% of human as well as cattle population and having only 4% of freshwater sources; the mega biodiversity that we have is the result of Indian ethos which is to be in sync with the nature.”

The UNCCD executive director, Mr. Thaw said that “Is it not time, that we realise that we need nature more than nature needs us, if at all. Is it not time, that we have the humility to rethink and redefine our relationship with nature. Perhaps, it is time for humanity to have a new social contract for nature.”

Stressing on this year’s theme Ms. Andersen said that actions for nature mean a lower risk of future pandemics, achieving the sustainable development goal, slowing climate change, healthier lives, better economies, being able to cherish that breath of fresh air or walk in the woods protecting life itself. In a post COVID world, we need to build back better, we need to protect the planet to protect ourselves.

2020-06-05
Editor in chief
Previous: Odisha, a record number of 123 more patients tested negative for the virus and recovered
Next: Subroto Bagchi and his wife contributed Rs 2.5 Cr to Chief Minister’s Relief Fund towards the fight against COVID-19