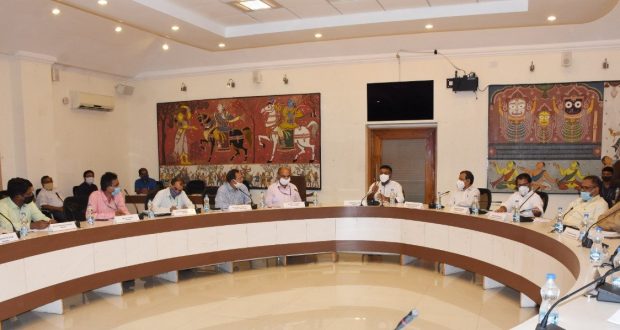 Bhubaneswar:5/6/20: The seven-member Central Team led by Sri Prakash applauded the preparedness, response and disaster management skill of Odisha in their meeting with Chief Secretary Asit Tripathy and other senior officers in the Lok Seva Bhawan conference hall today evening.

Members of the team mentioned that pre-positioning of manpower and machines in vulnerable pockets, timely evacuation of people from low laying areas and kuccha houses, preventive preparedness, and community involvement are the achievements of Odisha. “We have seen in remote areas that even electricity could be restored within 24 to 72 hours”.The Odisha Chief Secretary said: “Due to the geo-climatic location of Odisha and climate change impacts, cyclones are going to be a regular feature in summer, monsoon and post-monsoon months. So we request the Government of India to support us for building cyclone resilient infrastructure than that of spending a huge amount each year towards immediate restoration and rehabilitation

Additional Chief Secretary and Odisha SRC, Pradeep Kumar Jena emphasized on laying of underground cable in urban areas, resilient power transmission and distribution infrastructure in rural areas, building remote control GIS grid, raising the height of the saline embankments at Ieast up to 6.5 mts above the sea level and converting 1.66 lakh kaccha houses to cyclone resilient pucca houses. ACS Jena appraised that a preliminary estimate of around Rs.20,000 cr has been made for these resilient infrastructure building and immediate restoration of the damage caused by the Cyclone Amphan. Jena added, “Resilient infrastructure building is thrust of our memorandum”. Chief Secretary Mr. Tripathy said that the final memorandum would be sent within the next week.

Development Commissioner Suresh Chandra Mohapatra along with Principal Secretaries and Secretaries of different departments Participated in the discussions. The team visited the districts of Balasore, Bhadrakh, Jagatsinghpur, and Kendrapara in two different teams.

Leader of the Central Team Sri Prakash said they would submit the report to the Government of India soon with excellent suggestions of the State Government for resilient infra building.