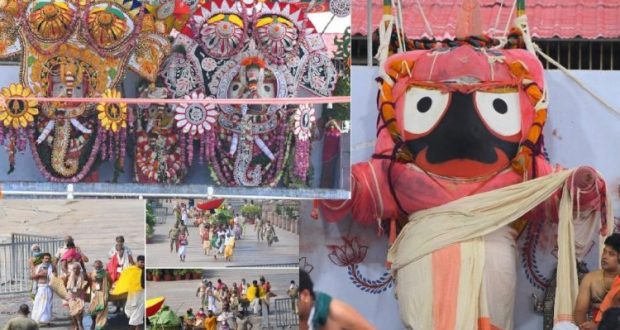 Puri:5/6/20: On the auspicious occasion of Snana Purnima, the Holy Trinity of Lord Jagannath, Balabhadra and Goddess Subhadra along with Lord Sudarshan gave darshan as Hati Besha.

Soon after the holy bathing ritual today morning on the Snana Mandap, the deities gave ‘darshan’ (divine glimpse) of ‘Gaja or Hati Besha.

Prior to this enchanting ‘Gajanan Besha’ or ‘Gaja Besha’ or ‘Hati Besha’, Mudirasta, the representative of Puri King Gajapati Dibyasingha Deb performed the ceremonial sweeping of the Snana Mandap, the process called Chhera Panhara as the Puri King was absent to perform the rituals.

The tradition of decking up Lord Jagannath and Balabhadra in Gajanana or Hati Besha after the ceremonial bath can be traced to the Hindu belief of beginning every religious rite with a worship of Lord Ganesh.

Snana Purnima which falls on the full moon day of Jyestha month is a prelude to the annual Rath Yatra of Lord Jagannath. As per tradition, the Gods are believed to fall sick after taking the divine bath with 108 pitchers of aromatic and herbal water. They recuperate from the illness during the next fortnight in a secret chamber called Anasara Ghara and reappear for Rath Yatra. Year-long cycle of festivals at Puri Srimandir begins from the Snana Purnima, the birthday of Lord Jagannath. As a custom, Kalia Thakura & his sibling deities adorn Hati Besha as per a belief that every Hindu religious rite begins with the worship of Lord Ganesh.

After having a grand bath with 108 pitchers of scented water, the Lords get ready to adorn Hati Besha, also known as the (elephant avatar), one of the rare appearances of the Holy Trinity.

Legends also has it that the Lords are dressed as Ganesh to satisfy the followers of the Ganapatya sect.

This Besha is chiefly conducted by the Palia Puspalak, Khuntia, Mekap and Daitapatis on this day. Lord Jagannath and Balabhadra assume Gajanana Besha. Raghav Das Mutt and Gopaltirtha Mutt supply the materials as per a prolonged tradition.

2020-06-05
Editor in chief
Previous: Eminent Odia litterateur Nityananda Satpathy has passed away
Next: Of the 23 persons tested positive in Khordha district in the last 24 hours, 13 have been reported from Bhubaneswar