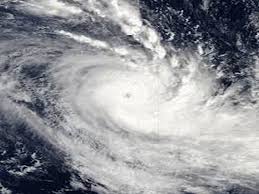 ‘NISARGA’ over north-western parts of Vidarbha and adjoining Madhya Pradesh

The Depression [remnant of the Severe Cyclonic Storm ‘NISARGA’] over western parts of Vidarbha moved northeastwards with a speed of about 27 kmph during past 06 hours and lay centered at 0830 hours IST of today, the 04th June 2020, over north-western parts of Vidarbha and adjoining Madhya Pradesh near latitude 21.2°N and longitude 76.9°E, about 60 km northwest of Akola (Maharashtra), 220 Km west-northwest of Nagpur (Maharashtra) and 230 km south-southeast of Bhopal (Madhya Pradesh).

It is very likely to move east-northeastwards and weaken into a well-marked Low-pressure area by today evening.

Squally wind, speed reaching 35-45 kmph gusting to 55 kmph, is prevailing over western districts of Vidarbha and adjoining Madhya Pradesh. It is likely to reduce gradually during next 12 hours.