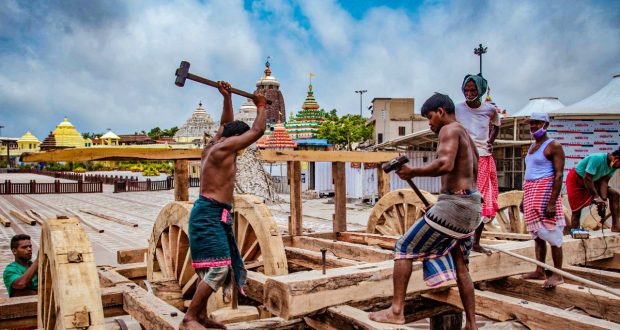 in State News June 2, 2020 Comments Off on Jagannath Temple in Puri will remain out of bounds for devotees till July 5 521 Views

Bhubaneswar/Puri:2/6/20: Jagannath Temple in Puri will remain out of bounds for devotees till July 5 and Snana Purnima and Rath Yatra of the sibling deities will be held with minimum public participation.

As the country stepped into Unlock Phase -I, chief administrator of the shrine Krishan Kumar announced these decisions after attending a review meeting on Snana Purnima on Monday.

The annual festival will conclude with Niladri Bije on July 5.

Stating that the next few weeks were crucial in the fight against COVID-19, the chief administrator appealed to devotees to not crowd Bada Danda during both Snana Purnima and Rath Yatra. “People can watch the festivals and the rituals in the comfort of their homes as I & PR Department will telecast the proceedings live,” said Kumar.

Earlier in the evening, officials along with some members of the temple managing body had invited Gobardhan Peeth Shankaracharya Swami Nischalananda Saraswati to the Snana Jatra festival on June 5 and sought his guidance on conducting the Champak Dwadasi ritual.

On Tuesday, the 12th century temple will witness the divine wedding of  Rukmini and Lord Krishna on the occasion of Rukminiharana Ekadasi. Champak Dwadasi ritual will held the following day.

2020-06-02
Editor in chief
Previous: District Collectors of Odisha will now conduct stock verification at foreign liquor ‘OFF’ and ‘ON’ shops
Next: Cuttack:2/6/20 :In yet another first from Odisha in corona fight, the one and half month long hands-on critical care training program for management of COVID19 was successfully completed at SCBMCH Cuttack with proper training of 249 doctors and 273 nursing sisters from 30 different districts of Odisha