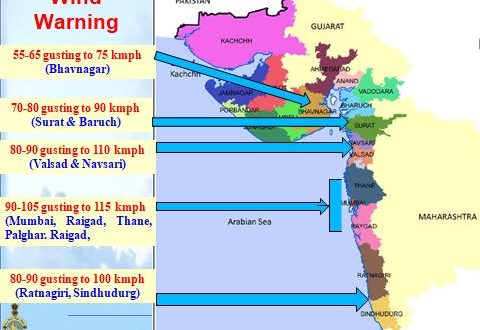 The deep depression over East-central Arabian Sea moved northwards with a speed of 11 kmph during past 06 hours and lay centred at 0830 hours IST of today, the 02nd June 2020 over East-central Arabian Sea near latitude 15.3°N and longitude 71.2°E, about 280 km west of Panjim (Goa), 450 km south-southwest of Mumbai (Maharashtra) and 670 km south-southwest of Surat (Gujarat).

It is very likely to intensify into a Cyclonic Storm during next 06 hours and further into a Severe Cyclonic Storm during subsequent 12 hours. It is very likely to move nearly northwards during next few hours, recurve north-northeastwards thereafter and cross north Maharashtra and adjoining south Gujarat coast between Harihareshwar and Daman, close to Alibag (Raigad District, Maharashtra)  during the afternoon of 03rd June as a Severe Cyclonic Storm with a maximum sustained wind speed of 100-110 kmph gusting to 120 kmph.

2020-06-02
Editor in chief
Previous: Innovative disinfection & sanitization solutions by common people selected in NIF
Next: NCVTC to develop of host-directed antivirals for COVID 19