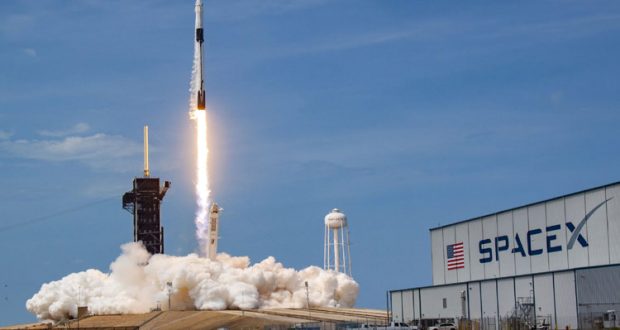 in International May 31, 2020 Comments Off on SpaceX Sends Two NASA Astronauts Into Orbit 449 Views

Washington: 31/5/20:A rocket ship built by Elon Musk’s SpaceX company on Saturday successfully blasted off with two NASA astronauts into orbit from the US state of Florida on their way to the International Space Station, marking the dawn of a new age in commercial space travel.

The blastoff from Kennedy Space Center in Florida also assumes significance as it marks the launch of humans into orbit from US soil for the first time in nearly a decade.

With the liftoff, SpaceX became the first private company to launch people into orbit, a feat achieved previously by only three governments: the US, Russia, and China.

The reusable, gumdrop-shaped capsule called Crew Dragon, would now take the two American astronauts to a 19-hour journey to the International Space Station (ISS). The spacecraft is scheduled to dock with the ISS at 10:29 am EDT on Sunday.

The successful launch, which was postponed early this week due to inclement weather, gave Americans something to cheer about as in the last three months they have lost over 100,000 of their countrymen due to the coronavirus that has brought the country’s economy to its knee. More than 40 million people have lost their job and the pandemic has pushed the economy into a recession.

Top US leadership including President Donald Trump, First Lady Melania Trump, and thousands of curious Americans had gathered to watch the launch live on a bright Sunday afternoon.

Congratulating Musk, NASA and the astronauts, Trump described the launch day as a great day for the country.

2020-05-31
Editor in chief
Previous: Health Activists and Anganwadi workers have tested positive for COVID-19
Next: PM Modi shares his thought in Mann Ki Baat programme on All India Radio