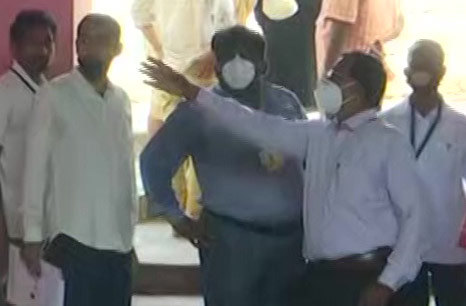 in State News May 31, 2020 Comments Off on Archaeological Survey of India team visited Puri Srimandir and inspected the Snana Mandap 621 Views

Puri: A team of Archaeological Survey of India (ASI) on Sunday visited Puri Srimandir and inspected the Snana Mandap (bathing altar) of the deities. The ASI sources said it was routine work.

Reports said the team examined the condition of the stones replaced on the Snana Mandap recently. They inspected the Nata Mandap and Jagamohan of the Lord Jagannath Temple. The ASI team was led by (Odisha circle) superintendent, Arun Kumar Mallick.

Nearly 60 stones which were damaged on the floor of Snana Bedi. The ASI officials said that the other routine repair works which are done as annual maintenance of the temple will be carried out as usual during the celebration of Rath Yatra.

The ASI usually takes up the scheduled check-up of Srimandir while the presiding deities are in their annual nine-day sojourn to Gundicha Temple during the Car Festival.

Puri Gajapati Dibyasingha Deb has said the annual Rath Yatra will be without any congregation of devotees due to coronavirus outbreak.

Gathering of people will be banned around Srimandir on Snana Purnima. The entry and exit points of Puri and Badadanda will also be sealed to prevent entry devotees into Puri.

2020-05-31
Editor in chief
Previous: Possible locusts attack in Odisha government issued an alert message to all the field functionaries
Next: Odisha government announced a slew of benefits amounting to Rs 87.50 crore for kendu leaf workers