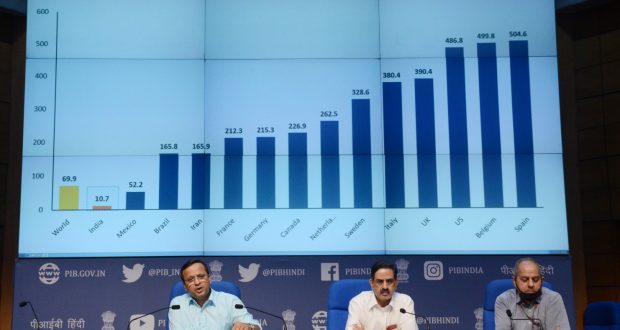 Newdelhi:26/5/20: Health Ministry has said that the recovery rate of patients from COVID-19 infection has now gone up to 41.61 percent which was 7.1 percent in March this year. Briefing media in New Delhi, Union Health Ministry official said that the fatality rate due to coronavirus infection has come down from 3.30 percent to 2.87 percent, which is amongst the lowest in the world.

The Health Ministry official also appealed to people to maintain hand hygiene and social distancing and wear masks while stepping out. He said, there is a need to focus on prevention and containment measures to contain the spread of COVID19 infection.  He said, about fifty percent of deaths reported among elderly people while 73 percent reported in the patients with comorbidity.

ICMR, Director General said that currently over one lakh sample for COVID-19 is being tested in a day. He said, the country has now 612 labs out of which 430 are government labs and 182 are private labs.

On use of Hydroxychloroquine- HCQ drug, the ICMR DG said that HCQ has been widely used against malaria and considering its anti-viral properties, in-vitro study data and availability and safety, ICMR  had recommended it as preventive treatment on trial basis under supervision. He said,  no major side-effects of HCQ have been found in studies in India except nausea and vomiting  and its use should be continued in preventive treatment for COVID-19.

He said it has been clearly advised that HCQ should be taken with food, not on empty stomach. He said, the ICMR  also emphasized that one ECG should be done during the treatment. He said, it expanded the use of HCQ to frontline workers also, considering the potential benefits.