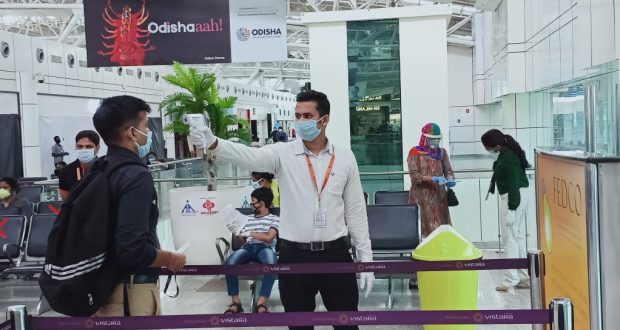 in State News May 25, 2020 Comments Off on Domestic air travel resumed in Odisha on Monday under specific rules and guidelines 584 Views

Bhubaneswar:25/5/20: Domestic air travel resumed in Odisha on Monday along with several other states, as the first flight arrived at the Biju Patnaik International Airport here from Delhi, an official said.

However, at least five flights from other states have been cancelled, he said. “Of the 10 flights scheduled to arrive here, five were cancelled due to problems at the departure points, while one flight from Delhi has already reached. Four more flights will land here on Monday,” airport director V V Rao told. Rao said two flights from the national capital and two others from Bengaluru are scheduled to make landings. All scheduled commercial passenger flights had been suspended since March 25 when the government imposed a nationwide lockdown to curb the coronavirus pandemic.

International scheduled commercial passenger flights remain suspended. Sources said Alliance Air and SpiceJet have cancelled their flights to Kolkata from Bhubaneswar till May 27 in view of the damages caused by cyclone ‘Amphan’ in West Bengal.

Government officials had said on Sunday evening that airports in Kolkata and Bagdogra in cyclone-hit West Bengal will not operate any domestic flights between May 25 and 27, but will handle 20 flights each per day from May 28 Airlines have been jittery in resuming services as multiple states have put in place separate norms and conditions regarding quarantine of passengers.

The Centre had last week announced the resumption of domestic flight services from May 25 under specific rules and guidelines like a cap on ticket pricing, wearing of face masks, no serving of food on board and making available details of medical conditions by travellers through the Aarogya Setu app or by filling up of a self-declaration form.

2020-05-25
Editor in chief
Previous: Mobus services will resume from tomorrow in Bhubaneswar
Next: Servitors body of Srimandir has prepared a list of servitors to be engaged in the much-awaited Snana Jatra