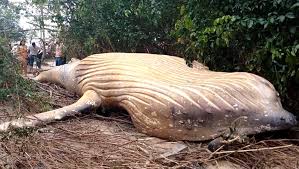 Kendrapara (Odisha);23/5/20: The carcass of a 40-feet-long critically endangered whale washed ashore in Gahirmatha marine sanctuary area in Odisha’s Kendrapara district, a senior forest official said on Saturday. The gargantuan mammal that weighed around 10 tonnes was spotted on the coast at Agarnasi Island, he said.

“The mammal’s body bore injury marks. The species figures in the list of IUCN Red List of threatened marine species. The forest department will conduct the post mortem examination of the endangered marine animal,” Rajnagar Mangrove (wildlife) Forest Division DFO Bikash Ranjan Dash. As there are injury marks, the mammal might have perished after being hit by either ship or trawler propellers, he said.

The mammal is a schedule-I species under the Wildlife (Protection) Act, 1972, the DFO said.”We are still undecided whether to bury or not the carcass after its post mortem and are also planning to preserve the skeletal remains of the mammal for posterity. After necessary legal formalities, we would seek suggestions from department high-ups regarding preservation of the skeletal remains of the whale,” the official said.

2020-05-23
Editor in chief
Previous: Domestic flights to resume from Monday; All flights from Delhi to operate from Terminal 3
Next: Govt of India Releases Rs 500 Cr Advance Assistance To Amphan-Hit Odisha